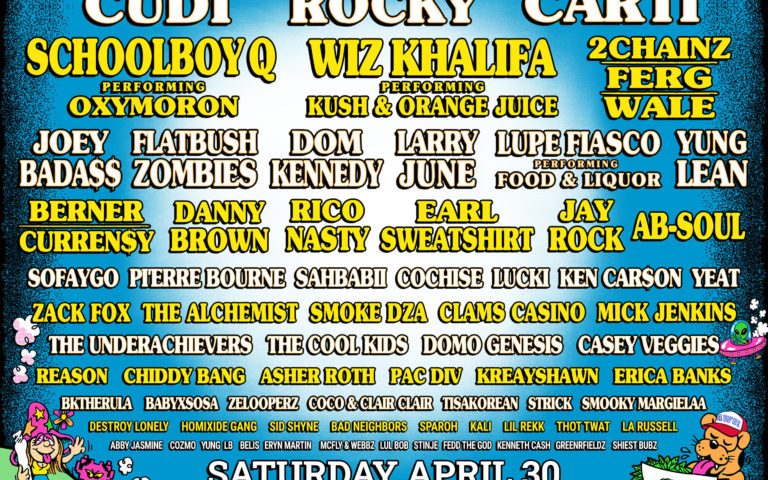 This April, a massive 420 event, packed with an impressive lineup of hip-hop and rap musicians, is heading to Southern California.

The Smoker’s Club Festival is an 18+ event will be held at the Glen Helen Amphitheater in San Bernardino, California, on Saturday, April 30—a destination that has been popularly chosen as the location for many other cannabis-related events in the past. If you’ve been looking for a sign to get out there and celebrate 420 in the sun, rather than in your living room, this is it. The Smoker’s Club announced the good news on January 20. “WE’RE BACK. APRIL 30. SO CAL,” The Smoker’s Club wrote on social media.

The 2022 event headliners include Kid Cudi, A$AP Rocky, Playboi Carti, Schoolboy Q (performing hits off his album Oxymoron), Wiz Khalifa (performing songs off his mixtape Kush & Orange Juice), 2 Chainz and so many more. Kid Cudi was busy in 2021, not only because he headlined Rolling Loud LA, but he also hinted that he’s got two albums in the works for 2022. Likewise A$AP Rocky headlined Rolling Loud Miami and ComplexCon 2021 last year and teased in a GQ interview that his new album, tentatively called All Smiles, would be released in the future.

This lineup has a lot in common with The Smoker’s Club Festival in 2018, which was held in Long Beach, California. Among its headliners were also Kid Cudi, Wiz Khalifa and Schoolboy Q, as well as Rashad, Ty Dolla $ign, Dom Kennedy, Lil Skies and Mac Miller prior to his passing.

This year’s The Smoker’s Club Festival is also jam-packed with over 65 artists in the lineup—the poster advertisement contains so many individual acts that they can barely fit all of them on one page. Joey Bada$$, Danny Brown, Rico Nasty, SahBabii, Clams Casino, The Cool Kids, Asher Roth, Kreayshawn—it’s an epic setup that you’re not likely to find anywhere else. It has been a rough few years for musicians who rely on touring and in-person performances, so seeing some of these great groups and individuals in one place is a joyous occasion. Given the vast amount of entertainment contained in this one-of-a-kind event, tickets are priced at $222.99 for general admission, $408.99 for VIP access and $429.00 and up for hotel packages.

The Smoker’s Club is a famous New York City-based lifestyle brand founded by Jonnyshipes, Smoke DZA and Shiest Bubz. The trio first came up with the name in early 2010 at a humble smoke session. By March 2010, they had managed to put together the first The Smoker’s Club show at SXSW. Back then, it gathered artists such as Currensy, Smoke DZA, Kendrick Lamar, Devin The Dude, Big K.R.I.T., Schoolboy Q, JayRock and many more. According to the founders, people everywhere began requesting The Smoker’s Club shows in their home cities, and “so the legend of the Smokers Club was born.” Since then, the event has been held in over 100 cities and 20 different countries across the globe.

Twelve years following that first event, The Smoker’s Club brand now offers high-end streetwear and accessories. Some of their best sellers are oversized hoodies with and premium cotton T-shirts, and the brand also offers a wide variety of beanies, ashtrays, stickers, pins and other accessories as well.

Not to mention that The Smoker’s Club also offers three “connoisseur cannabis” flowers that are all described as hybrid/indica-dominant. Donuts is described as a smooth and robust smoke that has a strange but pleasant “creaminess” at the end of the exhale. Critterz smells of guava and chocolate, with a “gassy essence” but a fruit-cream-like flavor when exhaling. Lastly, Jobstopper brings a heavy fuel profile, but still offers sweet flavors such as vanilla cake, cream cheese frosting and whipped cream.

The post The Smoker’s Club Lands in SoCal for a Massive 420 Festival appeared first on High Times.

This article originally appears: The Smoker’s Club Lands in SoCal for a Massive 420 Festival