Trigeminal neuralgia (TN),  tic douloureux  (also known as prosopalgia,  the Suicide Disease or Fothergill's disease) is a neuropathic disorder characterized by episodes of intense pain in the face, originating from the trigeminal nerve.  One, two, or all three branches of the nerve may be affected.  It is "one of the most painful conditions known to humans,  yet remains an enigma to many health professionals."   This pain may be felt in the ear, eye, lips, nose, scalp, forehead, cheeks, teeth, and/or jaw and side of the face;  some patients also experience pain in their left index finger.  Trigeminal neuralgia (TN) is not easily controlled but can be managed with a variety of treatment options.  It is estimated that 1 in 15,000 people suffer from trigeminal neuralgia,  although the actual figure may be significantly higher due to frequent misdiagnosis. In a majority of cases, TN symptoms begin appearing after the age of 50,  although there have been cases with patients being as young as three years of age.  It is more common in females than males.

The disorder is characterized by episodes of intense facial pain that last from a few seconds to several minutes or hours.  The episodes of intense pain may occur suddenly.  To describe the pain sensation, patients may describe a trigger area on the face so sensitive that touching or even air currents can trigger an episode;  however, in many patients the pain is generated spontaneously without any apparent stimulation. It affects lifestyle as it can be triggered by common activities such as eating, talking, shaving and brushing teeth.  Wind, high pitched sounds, loud noises such as concerts or crowds, chewing, and talking can aggravate the condition in many patients.  The attacks are said by those affected to feel like stabbing electric shocks, burning, pressing, crushing, exploding or shooting pain that becomes intractable.

Individual attacks usually affect one side of the face at a time, lasting from several seconds to a few minutes and repeat up to hundreds of times throughout the day.  The pain also tends to occur in cycles with remissions lasting months or even years.  10-12% of cases are bilateral, or occurring on both sides.  This normally indicates problems with both trigeminal nerves since one serves strictly the left side of the face and the other serves the right side.  Pain attacks are known to worsen in frequency or severity over time, in some patients.  Many patients develop the pain in one branch, then over years the pain will travel through the other nerve branches.

Outwardly visible signs of TN can sometimes be seen in males who may deliberately miss an area of their face when shaving,  in order to avoid triggering an episode.  Successive recurrences are incapacitating and the dread of provoking an attack may make sufferers unable to engage in normal daily activities.

Some patients report continuous pain or continuous pain during waking hours;  for reasons that are not yet known, TN sufferers rarely have pain attacks or are awoken due to pain while they are sleeping.  In fact, most patients have a very brief window of reprieve upon awakening from sleep, though that window can sometimes last only minutes.  The mechanisms as to why one feels no pain while they are asleep, or in a slumber state, even though a pillow may be in contact with a "trigger point" on one's face, remains a mystery to physicians and dentists.

This type of injury may rarely be caused by an aneurysm (an outpouching of a blood vessel); by a tumor; by an arachnoid cyst in the cerebellopontine angle;  or by a traumatic event such as a car accident or even a tongue piercing.

Any of the three branches of the nerve may be affected.  Neuralgia of the first branch results in pain around the eyes and over the forehead;  of the second branch, pain in the upper lip, nose, and cheek;  of the third branch, pain on the side of the tongue and the lower lip.

The cause is unknown, but the disorder occurs most frequently in middle and later life.
It affects women more frequently than men.

The pain may be a tearing, darting, or sharp cutting sensation that occurs in a portion of the face, typically on one side.  An attack may last for seconds or a few minutes, and its intensity may make one contract the facial muscles, hence the term tic.  Episodes may recur for days or weeks or months.

Often, there are trigger zones - spots on the face or certain movements - that precipitate the pain.  These may include smiling, talking, chewing, brushing one's teeth, or blowing the nose.  Although the pain may be incapacitating, it is not life-threatening.  Attacks come and go variably, but periods of remission may grow shorter as one ages.

Because it is easy to mistake the pain for a toothache, people suffering from trigeminal neuralgia often consult a dentist.  The result in many cases is inappropriate and often irreversible treatment, including tooth extraction, splints to readjust the jaw position, and root canal surgery.

There are many unusual diseases that do not respond well to conventional medicines.  TN is one of these.  There is always intense body pain.   Vaporized cannabis gets into the system the fastest!  It takes Marinol a full hour to reach full system effect.   However,  a cannabis extract taken orally is my best recommendation.  (20 mg. of THC is stronger than 120 mg. of Codeine).  CBD protects nerve cells and acts as an anti-oxidant.  THC and CBD together  treat pain. Cannabichromene (CBC) is an anti-inflammatory that contributes to the pain killing effects of cannabis.   Better to use the whole plant extract rather than use a synthetic of either.  Repeat every four (4) hours as needed.  There has never been a documented THC overdose (fatality).  The effective dose of THC is at least 1,000 times lower than the estimated lethal dose.  1,500 pounds of cannabis would have to be smoked in under fourteen (14) minutes to overdose.  Daily dosage of cannabis:  vaporized or taken orally stops the symptoms of Tic Douloureux. 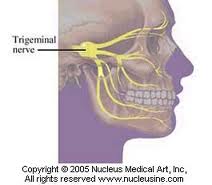 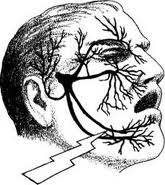