Researchers in Brazil have determined that cannabinoid cannabidiol (CBD), one of the non-psychoactive components of marijuana, can reduce the symptoms of anxiety in patients with SAD (social anxiety disorder), according to a data from a clinical trial that was published in the online edition of the Journal of Psychopharmacy.

The research team, affiliated with the University of Sao Paulo, tested oral doses of CBD in ten participants in a double-blind, placebo-controlled trial, using oral doses and monitoring the anti-anxiety activity.  Their conclusion stated, “CBD reduces anxiety in SAD and that this is related to its effects on activity in limbic and paralimbic brain areas.”

This is the first clinical trial that studied the effects of CBD on human beings with pathological anxiety, as well as looking at its underlying brain mechanisms.

Previous studies of the CBD compound have shown that it, and other cannabinoids have other medical benefits, including anti-inflammatory, anti-cancer, and neuroprotecticve effects, among others.

Scientists at the University of Sao Paulo, Brazil, investigated the effects of the natural cannabinoid cannabidiol (CBD) on patients with generalized social anxiety disorder in a simulated  public speaking test. Three groups were compared ,  healthy controls without any medication, 12 patients with anxiety disorder, who received a single dose of CBD (600 mg) and a group of 12 patients, who received a placebo in a double-blind design.

At the New York State Psychiatric Institute, USA, a randomized controlled 12-week study with 156 cannabis-dependent adults was conducted.   They received either 2x 20 mg dronabinol (THC) daily or placebo.   There was no significant difference between treatment groups in the proportion of participants who achieved  2 weeks of abstinence at the end of the maintenance phase (dronabinol: 17.7 per cent; placebo: 15.6 per cent).   THC was well-tolerated,  and improved withdrawal symptoms.  (Source: Levin FR, et al. Drug Alcohol Depend. 2011 Feb 8.

Researchers at the National Institute on Drug Abuse in Baltimore, USA, compared effects of THC with Sativex, which contains about equal amounts of THC and CBD.   Nine cannabis smokers received either placebo, and about 5 or 15 mg THC (as dronabinol or Sativex).   They concluded:  "Oral THC and Sativex produced similar, clinically insignificant increases in heart rate, anxiety, and 'good drug effects' with no serious adverse events.  Oral and oromucosal THC have slower absorption,  lower rate of THC delivery to the brain, and fewer associated adverse events as compared with smoked cannabis."   (Source: Karschner EL, et al. Clin Pharmacol Ther. 2011 Feb 2. 1.

"Social anxiety disorder, also called social phobia, is an anxiety disorder in which a person has an excessive and unreasonable fear of social situations.   Anxiety (intense nervousness) and self-consciousness  arise from a fear of being closely watched, judged and criticized by others.

Despite epidemiological reports indicating an association between social anxiety disorder (SAD) and cannabis use disorders (CUD),  there is a paucity of research exploring the nature of this relationship. The present investigation examined potential moderators of this relationship that are consistent with a tension-reduction model of addiction.  Specifically, physiological reactivity to stress and perceived coping with stress were evaluated as moderators of the relation between symptoms of SAD and CUD.  Physiological (SCR) and subjective (perceived coping) responses to unpredictable white noise bursts were collected from non-clinical participants (n=123).  Lifetime symptoms of CUD and anxiety disorders were assessed using a structured diagnostic interview.  CUD symptomatology was associated with symptoms of SAD but not with symptoms of any other anxiety disorder.  Only perceived coping to unpredictable stimuli moderated the relationship between SAD and CUD symptoms.  Findings are discussed in the context of tension-reduction models of co-occurring social anxiety and problematic cannabis use.

(CBD), one major non-psychotomimetic compound of the cannabis sativa plant, has shown anxiolytic effects both in humans and in animals.  This preliminary study aimed to compare the effects of a simulation public speaking test (SPST) on healthy control (HC) patients and treatment- SAD patients who received a single dose of CBD or placebo.  A total of 24 never-treated patients with SAD were allocated to receive either CBD (600 mg; n¼12) or placebo (placebo; n¼12) in a double-blind randomized design  1 ½ hours before the test.  The same number of HC (n¼12) performed the SPST without receiving any medication. Each volunteer participated in only one experimental session in a double-blind procedure.  Subjective ratings on the Visual Analogue Mood Scale (VAMS) and Negative Self-Statement scale (SSPS-N) and physiological measures (blood pressure, heart rate, and skin conductance) were measured at six different time points during the SPST.

The results were submitted to a repeated-measures analysis of variance. Pretreatment with CBD significantly reduced anxiety, cognitive impairment and discomfort in their speech performance, and significantly decreased alert in their anticipatory speech.  The placebo group presented higher anxiety, cognitive impairment, discomfort, and alert levels when compared with the control group as assessed with the VAMS.  The SSPS-N scores evidenced significant increases during the testing of placebo group that was almost abolished in the CBD group.  No significant differences were observed between CBD and HC in SSPS-N scores or in the cognitive impairment, discomfort, and alert factors of VAMS.  The  increase in anxiety induced by the SPST on subjects with SAD was reduced with the use of CBD, resulting in a similar response as the HC.

Moreover, other components of the plant can influence its pharmacological activity;  in particular, cannabidiol (CBD),  one major non-psychotomimetic compound of the plant,  has psychological effects substantially different from those of 9-THC (Zuardi, 2008).   Oral administration of CBD to healthy volunteers has been shown to attenuate (lessen the amount)  the anxiogenic effect of D9-THC.

CBD has similar effects to anxiolytic drugs in different paradigms including conditioned emotional response,  the Vogel conflict test, and the elevated plus-maze test (Zuardi, 2008).   In human studies, the anxiolytic effects of CBD have been elicited in subjects submitted to the “ Simulation Public Speaking Test” (SPST) (Zuardi et al, 1993).

CBD has anxiolytic properties and that these effects are associated with an action on the limbic and paralimbic brain areas .

Recently, we investigated the central effects of CBD on regional cerebral blood flow (rCBF), using single photon emission computed tomography (SPECT) in patients with SAD.   Relative to placebo, CBD was associated with significant decreases in subjective anxiety induced by the SPECT procedure and modulated the same brain areas  as the healthy volunteers.  The data reviewed above  led to the hypothesis that CBD  may be an effective compound in the treatment of SAD symptoms.  Cannabidiol reduces anxiety. 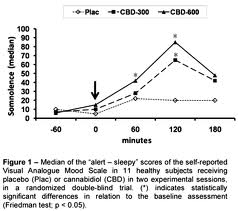 The data reviewed above led to the hypothesis that CBD may be an effective compound in the treatment of SAD symptoms.  Cannabinoids  will reduce the level of fear provoked by the short version of the Social Phobia Inventory  Test named  “MINISPIN”
(Oso´rio Fde et al, 2010; Connor  et al, 2001).

Neuropsychopharmacology - The administration of CBD appears to be suitable for individuals who have episodic performance related social phobia and who are able to predict the need for treatment in advance.

Considering previous results from a single dose of CBD, it is expected that this cannabinoid will reduce the level of fear provoked by the SPST test.

Two electrodes (Beckman, UK) were fixed with tape.  Contact with the skin was  made through high conductance gel (KYgel, Johnson & Johnson).  The skin conductance level (SCL) and the number of spontaneous fluctuations of the skin were recorded.

Systolic and diastolic were measured by a sphygmomanometer (Becton Dickinson).  Heart Rate:  Measured by manually counting the pulse rate.