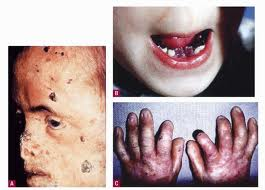 The acute, or hepatic, porphyrias primarily affect the nervous system, resulting in abdominal pain, vomiting, acute neuropathy, muscle weakness, seizures, and mental disturbances, including hallucinations, depression, anxiety, and paranoia. Cardiac arrhythmias and tachycardia (fast heart rate) may develop as the autonomic nervous system is affected.  Pain can be severe and can, in some cases, be both acute and chronic in nature.  Constipation is frequently present, as the nervous system of the gut is affected, but diarrhea can also occur.

Given the many presentations and the relatively uncommon  occurrence of porphyria, the patient may initially be suspected to have other, unrelated conditions. For instance, the polyneuropathy of acute porphyria may be mistaken for Guillain-Barré syndrome, and porphyria testing is commonly recommended in those scenarios.  Systemic lupus erythematosus features photosensitivity and pain attacks and shares various other symptoms with porphyria.

Not all porphyrias are genetic, and patients with liver disease who develop porphyria as a result of liver dysfunction may exhibit other signs of their condition, such as jaundice.

Patients with acute porphyria (AIP, HCP, VP) are at increased risk over their life for hepatocellular carci-noma (primary liver cancer) and may require monitoring.  Other typical risk factors  for liver cancer need not be present.

The cutaneous, or erythropoietic, porphyrias primarily affect the skin,  causing  photosensitivity (photodermatitis), blisters, necrosis of the skin and gums, itching, and swelling, and increased hair growth on areas such as the forehead.  Often there is no abdominal pain, distinguishing it from other porphyrias.

In some forms of porphyria, accumulated heme precursors excreted in the urine may cause various changes in color, after exposure to sunlight, to a dark reddish or dark brown color.  Even a purple hue or red urine may be seen.

Subtypes
Subtypes of porphyrias depend on what enzyme is deficient.

Culture and history
Porphyrias have been detected in all races, multiple ethnic groups on every continent includ-ing Africans, Asians, Australian aborigines, Caucasians, Peruvian, Mexican, Native Americans, and Sami.  There are high incidence reports of AIP in areas of India and Scandinavia and over 200 genetic variants of AIP, some of which are specific to families,  although some strains have proven to be repeated mutations.

The links between porphyrias and mental illness have been noted for decades.  In the early 1950s patients with porphyrias (occasionally referred to as "Porphyric Hemophilia")  and severe symptoms of depression or catatonia were treated with electroshock.

It is recommended that patients with a history of acute porphyria, and even genetic carriers, wear an alert bracelet or other identification at all times.  This is in case they develop severe symptoms, or in case of accidents where there is a potential for drug exposure, and as a result they are unable to explain their condition to healthcare professionals.  Some drugs are absolutely contraindicated for any patients with any porphyria.

Precipitating factors:
If drugs or hormones have caused the attack, discontinuing the offending substances is essential.  Infec-tion is one of the top causes of attacks and requires vigorous treatment.

Neurologic and psychiatric issues
Patients who experience frequent attacks can develop chronic neuropathic pain in extremities as well as chronic pain in the gut.  Gut dysmotility, ileus, intussusception, hypoganglionosis, encopresis in children and intestinal pseudo-obstruction have been associated with porphyrias.  This is thought to be due to axonal nerve deterioration in affected areas of the nervous system and vagal nerve dysfunction.

Seizures:
Seizures often accompany this disease.  Most seizure medications exacerbate this condition.  Treatment can be problematic:  barbiturates especially must be avoided.  Some benzodiazepines are safe and, when used in conjunction with newer anti-seizure medications such as gabapentin, offer a possible regime for seizure control.

Underlying liver disease:
Some liver diseases may cause porphyria even in the absence of genetic predisposition.  These in-clude hemochromatosis and hepatitis C.  Treatment of iron overload may be required.

Often,  empirical treatment is required if the diagnostic suspicion of a porphyria is high since acute attacks can be fatal.  A high-carbohydrate diet is typically recommended;   in severe attacks, a glucose  (10% infusion) is started.

Porphyria is a group of disorders caused by abnormalities in the chemical steps that lead to heme production.
Heme is a vital molecule for all of the body's organs, although it is most abundant in the blood, bone marrow, and liver.  Heme is a component of several iron-containing proteins called hemoproteins,  including hemoglobin (the protein that carries oxygen in the blood).
Researchers have identified several types of porphyria, which are distinguished by their genetic cause and their signs and symptoms.  Some types of porphyria, called cutaneous porphyrias,  primarily affect the skin. Areas of skin exposed to the sun become fragile and blistered, which can lead to infection, scarring, changes in skin coloring (pigmentation), and increased hair growth.  Cutaneous porphyrias include congenital erythropoietic porphyria,  erythropoietic protoporphyria,  hepatoerythropoietic porphyria,  and porphyria cutanea tarda.
Other types of porphyria, called acute porphyrias,  primarily affect the nervous system.  These disorders are described as "acute" because their signs and symptoms appear quickly and usually last a short time..  These signs and symptoms can be life-threatening, especially if the muscles that control breathing become paralyzed.  Acute porphyrias include acute intermittent porphyria and ALAD deficiency porphyria.  Two other forms of porphyria, hereditary coproporphyria and variegate porphyria, can have both acute and cutaneous symptoms.
Each form of porphyria results from mutations in one of these genes:   ALAD,  ALAS2,  CPOX,  FECH, HMBS,  PPOX,  UROD, or UROS.
Causes, incidence, and risk factors
Normally, the body makes heme in a multi-step process.  Porphyrins are made during several steps of this process.  Patients with porphyria have a deficiency of certain enzymes needed for this process.  This causes abnormal amounts of porphyrins or related chemicals to build up in the body.There are many different forms of porphyria.  The most common type is porphyria cutanea tarda (PCT).
Drugs, infection, alcohol, and hormones such as estrogen may trigger attacks of certain types of porphyria.

Other symptoms may include:

Porphyrias are life-long diseases with symptoms that come and go.  Some forms of the disease cause more symptoms than others.  Proper treatment and avoidance of triggers can help prolong the time between attacks.

Each type of porphyria is treated differently.  Treatment may involve avoiding triggers, receiving heme through a vein, taking medicines to relieve symptoms, or having blood drawn to reduce iron in the body. People who have severe attacks may need to be hospitalized.

These include forms of the disease that cause predominantly nervous system symptoms and, in some cases, skin symptoms, as well.  Acute porphyria attacks are rare before puberty and after menopause in women.  Signs and symptoms may last one to two weeks.  Possible signs and symptoms include:

These include forms of the disease that cause  skin symptoms as a result of oversensitivity to sunlight, but don't affect your nervous system.  Some forms of cutaneous porphyria begin to show signs and symptoms during infancy or childhood.  If you have this form of porphyria, you may experience:

When to see a doctor
Many signs and symptoms of porphyria are similar to those of other, more common conditions.  This can make it difficult to know if you're having an attack of porphyria.  Any of the following symptoms should prompt you to seek immediate medical attention:

Physicians often prescribe opioids for chronic pain, anti-depressants for depression, oral contraceptives to stop hormonal ups and downs,  all as treatment of the symptoms of Porphyria.  The list of side effects from even one of these medications is overwhelming.

There is scientific evidence to suggest that cannabis may be beneficial in treating a number of symptoms, (including seizures), of Porphyria with little or no side effects.

One of the first therapeutic uses suggested for cannabis was as an anticonvulsant.

Cannabis contains over 300 compounds.   At least 66 of these are cannabinoids,  which are the basis for medical and scientific use of cannabis.  This presents the research problem of isolating the effect of specific compounds  and taking account of the interaction of these compounds .   Cannabinoids can serve as appetite stimulants, antiemetics, antispasmodics, and have some analgesic effects.    Five important cannabinoids  found in the cannabis plant are tetrahydrocannabinol, cannabidiol, cannabinol, β-caryophyllene, and cannabigerol..Four other lesser known cannabinoids are:  cannabitriol (CBT), delta-8-THC, cannabicyclol (CBL), and cannabavarin (THCU).

It is the combination of these cannabinoids that have synergistic and antagonistic effects  in the human body.  Several studies have shown the anticonvulsant effect of cannabinoids.  Part of the mechanism by which medical cannabis has been shown to reduce tissue inflammation is via the compound β-caryophyllene.   A cannabinoid receptor called CB2 plays a vital part in reducing inflammation in humans and other animals.   β-Caryophyllene has been shown to be a selective activator of the CB2 receptor.   β-Caryophyllene is especially concentrated in cannabis essential oil,  which contains about 12–35% β-caryophyllene.

Cannabinol (CBN) (can-nab-i-nol)  is a therapeutic cannabinoid found in Cannabis sativa and Cannabis indica.   It is also produced as a metabolite, or a breakdown product, of tetrahydrocannabinol (THC).   CBN acts as a weak agonist of the CB1 and CB2 receptors, with lower affinity in comparison toTHC.. It is referred to as the “nervous system” drug.  It has analgesic and anti-inflammatory effects.  It releases vasodilators and allows increased vascular permeability.  It plays an important part in pain signaling and repair of tissue.  It also relaxes hepatic arteries.

Cannabidiol (CBD), is a major constituent of medical cannabis.   CBD represents up to 40% of extracts of the medical cannabis plant.   Cannabidiol has been shown to relieve convulsion, inflammation, anxiety, cough and congestion, nausea, and inhibits cancer cell growth.   Recent studies have shown cannabidiol to be as effective as atypical antipsychotics in treating schizophrenia.   Because cannabidiol relieves the aforementioned symptoms, cannabis strains with a high amount of CBD may benefit people with  Porphyria.

Cultivar:
Lavender:  Lavendula x intermedia ‘Provence’ contains anti-convulsive properties.
35 % linglool.  Calming, relaxing, anti-convulsive effect, sedative effect.  Lavender extract (lavender oil).  Use in your aromatherapy container around the house and especially in the bedroom and bathroom.   Make or purchase sachets filled with Lavendula x intermedia ‘Provence’.  Place them in your dresser drawers, under your mattress cover, inside your pillow covers, inside the linen closet, inside your clothes closet, in the bottom of the clothes hamper, inside sweater protectors, etc.1a

15. The Institute of Medicine wrote in its Mar. 17, 1999 report, "Marijuana and Medicine: Assessing the Science Base":
16. "Epilepsy is a chronic seizure disorder that affects about 2 million Americans and 30 million people worldwide. It is characterized by recurrent sudden attacks of altered con-sciousness, convulsions, or other motor activity. A seizure is the synchronized excitation of large groups of brain cells.
17. There are anecdotal and individual case reports that marijuana controls seizures in epi-leptics (reviewed in a 1997 British Medical Association report), but there is no solid evi-dence. While there are no studies indicating that either marijuana or THC worsen sei-zures, there is no scientific basis to justify such studies."
18. Robyn Wallace, PhD