Hyperhidrosis can either be generalized or localized to specific parts of the body.  Hands,  feet,  armpits, and the back area are among the most active regions of perspiration due to the relatively high concentration of sweat glands;  however, any part of the body may be affected.

Hyperhidrosis might be also divided into palmoplantar (symptomatic sweating of primarily the hands or feet), gustatory or generalized hyperhidrosis.

Alternatively, hyperhidrosis may be classified according to the amount of skin that is affected and its possible causes.  In this approach, excessive sweating in an area that is greater than 100 cm2 (up to generalized sweating of the entire body) is differentiated from sweating that affects only a small area.

Primary hyperhidrosis is caused by an overactive sympathetic nerve.  Doctors and surgeons have an idea that it may be related to genetics.  Nervousness or excitement can exacerbate the situation for many sufferers.  Other factors can play a role; certain foods and drinks, nicotine, caffeine, and smells can trigger a response.

A common complaint of patients is that they get nervous because they sweat,  then sweat more because they are nervous.

Sweating is normal, but palmar hyperhidrosis is a condition that causes excessive sweating of the hands. Excessive sweating of the face, underarms, groin and feet may also occur.  This is not a case of being nervous.  This is a physiologic condition caused by an overactive sympathetic nervous system.  It occurs in about one percent  of the population and may be hereditary.

Hyperhidrosis can be very embarrassing and debilitating.  It usually begins in childhood.  Moist hands cause sufferers to avoid social contacts, such as shaking hands. Teens may be embarrassed to date or participate in social activities.  Writing a letter can be an impossible task because so much sweat pours from the hand to the paper.  Employees may have trouble gripping equipment. This excessive sweating may be related to heat or stress, but it often occurs for no particular reason.

Hyperhidrosis can have physiological consequences such as cold and clammy hands, dehydration, and skin infections secondary to maceration of the skin.  Hyperhidrosis can also have devastating emotional effects on one’s life.

Affected people are constantly aware of their condition and try to modify their lifestyle to accommodate this problem.  This can be disabling in professional, academic and social life, causing embarrassments. Many routine tasks become impossible.

Excessive sweating of the hands interferes with many routine activities,  such as securely grasping objects. Some hyperhidrosis sufferers avoid situations where they will come into physical contact with others, such as greeting a person with a handshake.  Hiding embarrassing sweat spots under the armpits limits the sufferers' arm movements and pose.  In severe cases, shirts must be changed several times during the day. Additionally, anxiety caused by self-consciousness to the sweating may aggravate the sweating.  Excessive sweating of the feet makes it harder for patients to wear slide-on or open-toe shoes, as the feet slide around in the shoe because of sweat.

Some careers present challenges for hyperhidrosis sufferers.  For example, careers that require the deft use of a knife may not be safely performed by people with excessive sweating of the hands.  Those in careers that require federal background checks (such as education), may encounter difficulty with some methods of fingerprint scanning used by law enforcement agencies.  Employees, such as sales staff, who interact with many new people can be negatively affected by social rejection.  It is extremely frustrating whenever a sufferer touches or holds something on the sales display, it has to be wiped clean each and everytime they come in contact with it as it leaves a lot of sweat marks.  The risk of dehydration can limit the ability of some sufferers to function in extremely hot (especially if also humid) conditions.  Even the playing of musical instruments can be uncomfortable or difficult because of sweaty hands.

Primary hyperhidrosis is estimated at 2.8% of the population of the United States.  It affects men and women equally, and most commonly occurs among people aged (25–64)  years.  Some may have been affected since early childhood.  About thirty to fifty percent have another family member afflicted, implying a genetic predisposition.  In 2006, researchers of Saga University in Japan reported that predisposition to palmar hyperhidrosis maps to the chromosomal region .

Injections of botulinum toxin type A, under the brand names Botox or Dysport, are used to disable the sweat glands.  The effects may persist from four to nine months depending on the site of injection. This procedure has been approved by the U.S. Food and Drug Administration (FDA) to treat underarm sweating.

Several anticholinergic drugs, such as oxybutynin (brand name Ditropan), reduce hyperhidrosis.  Side effects include drowsiness, visual symptoms and dryness in the mouth and other mucus membranes.  A time release version of oxybutynin is also available (Ditropan XL), with purportedly reduced effectiveness  Glycopyrrolate (Robinul) is used on an off-label basis. The drug seems to be almost as effective as oxybutynin and has similar side-effects.   Other anticholinergic agents that have been tried include propantheline bromide (Probanthine) andbenztropine (Cogentin).

Antidepressants and anxiolytics  were formerly used, based upon the hypothesis that primary hyperhidrosis was related to an anxious personality style.

The other main surgical option is endoscopic thoracic sympathectomy (ETS), which cuts, burns, or clamps the thoracic ganglion on the main sympathetic chain that runs alongside the spine.  Clamping is intended to permit the reversal of the procedure.  ETS is generally considered a "safe, reproducible, and effective procedure and most patients are satisfied with the results of the surgery".  Satisfaction rates above eighty percent  have been reported, and are higher for children.  The procedure causes relief of excessive hand sweating in about eighty five to ninety five percent of patients.   ETS may be helpful in treating axillary hyperhidrosis, facial blushing and facial sweating;  however, patients with facial blushing and/or excessive facial sweating experience higher failure rates, and patients may be more likely to experience unwanted side effects.

Additionally, the original sweating problem may recur due to nerve regeneration, sometimes within six months of the procedure.

Other side effects include Horner's Syndrome (about 1%),  gustatory sweating (less than 25%) and on occasion very dry hands (sandpaper hands).   Some patients have also been shown to experience a cardiac sympathetic denervation, which results in a ten percent  lowered heartbeat during both rest and exercise; leading to an impairment of the heart rate to workload relationship.

Lumbar sympathectomy is a relatively new procedure aimed at those patients for whom endoscopic thoracic sympathectomy has not relieved excessive plantar (foot) sweating.  With this procedure the sympathetic chain in the lumbar region is clipped or divided in order to relieve the severe or excessive foot sweating.  The success rate is about ninety percent  and the operation should be carried out only if patients first have tried other conservative measures.  This type of sympathectomy is also controversial, as patients undergoing the procedure often end up with hypotension, (a sign of autonomic dysfunction), and in males retrograde  ejaculation (male infertility) and inability to maintain erection has been reported.  New information has become available and shown that the issues of retrograde ejaculation, inability to maintain erection and hypertension are not validated.  In separate 2007 and 2010 papers,  none of the patients experienced sexual dysfunction.

Percutaneous sympathectomy is a related minimally invasive procedure in which the nerve is blocked by an injection of phenol.  The procedure allows for temporary relief in most cases.  Some medical professionals advocate the use of this more conservative procedure before the permanent surgical sympathectomy.

Horner's syndrome (droopy eyelid) may occur after the procedure.  Fortunately, this occurs in less than one percent  of patients when the operation is performed for palmar hyperhidrosis.  When thoracoscopic sympathectomy is performed for pain in the hands (reflex sympathetic dystrophy) or vascular disease of the hands, more of the sympathetic nerve is removed and there is a slightly higher risk of Horner's syndrome.

Compensatory sweating seems to be a permanent side effect.

Limited or (no)  research has been done on effects of cannabis and Palmar Hyperhidrosis: 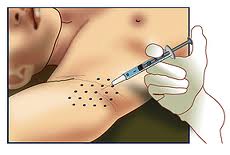 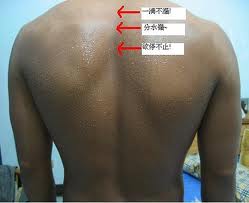