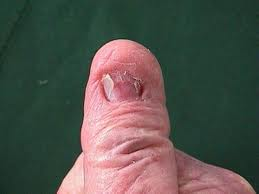 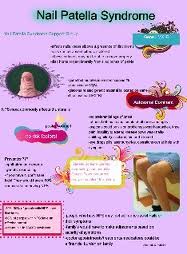 The hallmark features of this syndrome are poorly developed fingernails, toenails, and patellae (kneecaps). Sometimes, this disease causes the affected person to have either no thumbnails or a small piece of a thumbnail on the edge of the thumb. Other common abnormalities include elbow deformities, abnormally shaped pelvic (hip) bones, and kidney (renal) disease. Also, some research shows people with NPS are more prone to glaucoma and scoliosis, due to poorly developed spines. People with nail-patella syndrome may display only a few or many of the recognized signs of this disease. Symptoms vary widely from person to person. Signs even vary within a single family with multiple affected members

Nail-patella syndrome (NPS) is a rare genetic disorder that is usually apparent at birth or during early childhood. Although the symptoms and physical characteristics associated with NPS may vary, characteristic abnormalities tend to include improper development (dysplasia) of the fingernails and toenails; absence (aplasia) and/or underdevelopment (hypoplasia) of the knee caps (patellae); underdevelopment of certain bones and/or webbing of skin at the bend of the elbow(s); and/or abnormal projections of bone from the upper (superior) portion of both sides of the hipbone (bilateral iliac horns).

In addition, some individuals within certain families (kindreds) may have abnormally increased fluid pressure of the eyes (glaucoma). The condition results due to progressive blockage of the outflow of fluid (aqueous humor) from the front chamber of the eyes (open-angle glaucoma). Without appropriate treatment, the gradual increase in fluid pressure may cause increased narrowing of visual fields and eventual blindness. Other eye (ocular) abnormalities may also be associated with NPS. For example, in some affected individuals, the inner margin (pupillary margin) of the colored portion of the eyes (irides) may appear abnormally dark (hyperpigmentation) and "cloverleaf shaped" (Lester iris).

The treatment for nps and glaucoma depends upon the nature and severity of each case. As a rule, glaucoma cannot be cured, but it can be controlled. Eye drops, pills, laser procedures, and surgical operations are used to prevent or slow further damage from occurring. With any type of glaucoma, periodic examinations are very important to prevent vision loss. Because glaucoma can worsen without your being aware of it, your treatment may need to be changed over time.

Nail-patella syndrome has been recognized as an inherited disorder for over 100 years. It is caused by mutations in a gene known as LIM Homeobox Transcription Factor 1-Beta (LMX1B), located on the long arm of chromosome 9.

Nail-patella syndrome is inherited in an autosomal dominant manner. This means that possession of only one copy of the defective gene is enough to cause disease. When a parent has nail-patella syndrome each of their children has a 50% chance to inherit the disease-causing mutation.

The most obvious sign associated with nail-patella syndrome is absent, poorly developed, or unusual fingernails. Fingernail abnormalities are found in over 80% of patients with this disorder. Abnormalities may be found in one or more fingernails. Only rarely are all fingernails affected. This disease most commonly affects the fingernails of the thumbs and index fingers. The pinky fingernail is least likely to be affected. Fingernails may be small and concave with pitting, ridges, splits, and/or discoloration. Toenails are less often affected. The lunulae, or light-colored crescent moons, at the base of the fingernail bed next to the cuticle are sometimes triangularly-shaped in people with nail-patella syndrome. Kneecap abnormalities are the second most common sign associated with this disorder. Either or both kneecaps may be missing or poorly formed. If present, kneecaps are likely to be dislocated. The knees of people with nail-patella syndrome may have a square appearance. Besides the kneecap, other support structures including bones, ligaments, and tendons may also be malformed. These support structures stabilize the knee, therefore patients with some leg malformations may have difficulty in walking. The hip bones of approximately 80% of patients with nail-patella syndrome have unusual bony projections called posterior iliac horns.

These bony projections, or spurs, are internal and not obvious unless they are detected on x ray. This unusual pelvic anatomy is not associated with any other disease. Kidney disease is present in at least 30% of people with nail-patella syndrome. Biopsy shows lesions that resemble those of inflammation of the clusters of capillaries in the kidneys (glomerulonephritis), but without any infection present. Kidney failure is the most dangerous consequence of nail-patella syndrome. It occurs in about 30% of patients who have kidney involvement. An early sign of kidney involvement is the presence of protein or blood in the urine (chronic, benign proteinuria and hematuria.) Kidney involvement is progressive, so early diagnosis and treatment of renal disease is important. Kidney disease has been reported in children with nail-patella syndrome, but renal involvement more commonly develops during adulthood. Various skeletal symptoms may occur. Patients with nail-patella syndrome may not be able to fully straighten their arms at the elbow. This may create a webbed appearance at the elbow joint. Patients may have sideways bent fingers, poorly developed shoulder blades, clubfoot, hip dislocation, unusual neck bones, or scoliosis. Eye problems may be present and vary from person to person. Nail-patella syndrome is associated with open angle glaucoma. Open angle glaucoma is caused by fluid blocked into the front chamber of the eye. This blocked fluid builds increasing pressure into the eye. If untreated, this increased pressure may lead to permanent damage of the optic nerve and irreversible blindness. Some patients with nail-patella syndrome have ptosis, or drooping eyelids. Nail-patella syndrome has also been associated with abnormalities of the cornea, cataracts, and astigmatism. Additionally, the irises of the eye may be multicolored, possibly displaying a clover-shaped pattern of color.

Treatment is usually not necessary. Treatment, when required, depends on each patient's specific symptoms. Severe kidney disease is treated with dialysis or a kidney transplant. Patients receiving kidney transplants do not develop nail-patella type renal complications in their new kidney. A wheelchair may be required if walking becomes painful due to bone, tendon, ligament, or muscle defects. Orthopedic surgery may be necessary for congenital clubfoot deformity. Manipulation or surgery may be required to correct hip dislocation. Cataracts are also surgically treated. Medical treatment at early signs of glaucoma prevents progression of the disease to blindness.

Genetic counseling is offered to persons who have the disease. Parents with this disease have a 50% chance of passing it to each of their children. As of 2001, current genetic testing technology cannot predict the severity or scope of an individual's symptoms. Because many possible manifestations of nail-patella syndrome exist, patients are advised to pursue extra medical care including regular urinalysis and special eye exams. Children with nail-patella syndrome should be screened for scoliosis.

Diagnosis of this disease is most often made on visual medical clues such as the characteristic abnormalities of the fingernails and kneecaps. Diagnosis is confirmed by x-ray images of the affected bones and, when indicated, kidney biopsy. The bony pelvic spurs found in 80% of patients with nail-patella syndrome are not associated with any other disease. Prenatal diagnosis for nail-patella syndrome by third-trimester ultrasound was documented in 1998. Prenatal diagnosis via genetic testing of cells obtained by chorionic villus sampling was reported the same year. As of 2001, prenatal genetic testing for nail-patella syndrome is not yet widely available. There is controversy surrounding the use of prenatal testing for such a variable disorder. Prenatal testing cannot predict the extent of an individual's disease.  A  person may experience a limited range of motion in the elbows. Vision complications are another main characteristic of the disease and include loss of peripheral vision, red eyes, sore eyes, blurry vision, blind spots, headaches and difficulty adjusting in a dark room.

There is no cure for nail patella syndrome, but treatment is symptomatic. Eye drops, pills, laser treatments and surgery are options for vision complications that arise. A patient should speak with an orthopedic specialist for correctional treatments

This week we continue our discussion of medical conditions for which marijuana can be recommended in other states. The medical marijuana laws in Michigan and Maine specifically mention “nail-patella syndrome” as a condition for which medical marijuana may be recommended, and the Wisconsin medical marijuana bill that was passed by the State Senate but not acted upon by the State Assembly in the most recent legislative session also specifically mentions nail-patella syndrome. (The bill also mentioned another relatively rare medical condition, Ehlers-Danlos syndrome, as well as post-traumatic stress disorder, or PTSD.)

Nail–patella syndrome is a rare genetic disease caused by a mutation in a portion of chromosome number 9 and occurs in about one in 50,000 individuals. The genetic defect causes abnormalities in connective tissue metabolism and structural defects in collagen, and is inherited as an autosomal dominant trait. This means that it is not associated with the chromosomes that determine gender and is therefore not found more frequently in one or the other gender, and that, if the mutation is present in one parent, the disease will be present in at least half of the children as well.

Nail-patella syndrome causes fingernail abnormalities, primarily absent or under developed thumbnails, absent or under developed patellae, or knee caps, pelvic abnormalities, and deformation or abnormal development of the radial heads, or bones in the forearms, and in other joints. Nail-patella syndrome is also associated with kidney disease and glaucoma. How the association with glaucoma was discovered is an example of how medical knowledge is sometimes advanced by coincidence and luck, Dr. Paul Lichter, a physician at the University of Michigan Kellogg Eye Center, noticed that a glaucoma patient he was treating had no thumbnails and abnormal knee caps, and remembered that the patient’s mother, whom he had treated many years before, had the same conditions. Both patients had nail-patella syndrome, as did 24 other members of their extended families, more than 50% of whom also had glaucoma. Genetic analysis of these patients showed that the genes associated with their glaucoma are also located on chromosome number 9, in the same area of the chromosome called 9q34, where the mutation associated with nail-patella syndrome is located. Around 50% of all nail-patella syndrome patients also have glaucoma, though it is not known whether the genetic defect that causes nail-patella syndrome also causes the glaucoma. Kidney disease is often part of the syndrome as well, affecting about 40% of patients and leading to kidney failure in about 10% of them.

Severe pain due to joint malformations and instability is common in nail-patella syndrome, and treatment is typically to try to reduce the severity of the symptoms, to reduce the pressure within the eye if the patient has glaucoma, and to prevent any kidney problems from progressing to renal failure. As we’ve seen, marijuana can be used to reduce eye pressure in glaucoma and is very effective in treating pain. It is important to note that marijuana can be recommended for both conditions in Colorado as well, even though nail-patella syndrome is not specifically mentioned in Article.18 of the Constitution.

How is it that specific diseases are included in the laws of some states and not in others? At least in the case of Michigan, it seems that special interest groups and individuals with nail-patella syndrome successfully lobbied the legislature to include it by name in the legislation. Indeed, most states with medical marijuana laws have provided for a process by which new conditions can be added to the approved list. In Colorado, patients or physicians may petition the Department of Health to have new conditions added. Several such petitions have been filed in Colorado, but to date, none have been approved. According to press reports, this has been because the medical research on the use of cannabis in those conditions has been found to be inconclusive, incomplete or less than definitive.