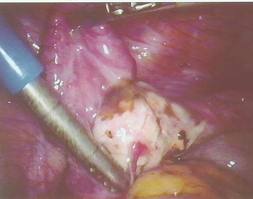 Adenomyosis  is not  the same as endometriosis a condition in which the uterine lining becomes implanted outside the uterus although women with adenomyosis often also have endometriosis.  The cause of adenomyosis remains unknown, but the disease typically disappears after menopause.  For women who experience severe discomfort from adenomyosis, there are treatments that can help, but hysterectomy is the only cure.
Although adenomyosis can be quite painful, the condition is generally harmless.

Some women with Adenomyosis do not experience any symptoms, while others may have severe, debilitating symptoms.  The Endometrial implants that grow into the wall of the uterus bleed during menstruation, (the same as endometrial tissue bleeds) is discharged vaginally as menstrual bleeding.  The vaginal pressure can be severe enough to feel like the uterus is trying to push out through the vagina, like the last stage of labor when the baby's head pushes into the cervix.  Other symptoms include:

The cause of adenomyosis is not known.  Expert theories about a possible cause include:

1. Invasive tissue growth. Some experts believe that adenomyosis results from the direct invasion of endometrial cells from the surface of the uterus into the muscle that forms the uterine walls.  Uterine incisions made during an operation such as a cesarean section (C-section) promotes the direct invasion of the endometrial cells into the walls of the uterus.

2. Developmental origins.  Other experts speculate that adenomyosis originates within the uterine muscle from endometrial tissue deposited there when the uterus was first forming in the female fetus.

3. Uterine inflammation related to childbirth.  Still another theory suggests a link between adenomyosis and childbirth.  An inflammation of the uterine lining during the postpartum period might cause a break in the normal boundary of the cells that line the uterus.

Regardless of how adenomyosis develops, its growth depends on the circulating estrogen in a woman's body.  When estrogen production decreases at menopause, adenomyosis goes away.

Treatment options range from use of Natural Progesterone Cream, NSAIDs, hormonal suppression, anti inflammatory pain killers and IUD Coil for short term symptomatic relief (although IUD may cause further irritation of the uterus).  Women with adenomyosis fail endometrial ablation because the ablation only affects the surface endometrial tissue, not the tissue that has grown into the muscle lining.  This remaining tissue is still viable and will continue to cause pain.

Those that believe an excess of estrogen (Estrogen Dominance) is the cause of Adenomyosis, or that it aggravates the symptoms, recommend avoiding products with xenoestrogens and/or recommend taking Natural Progesterone Cream which may help balance the hormone levels.

Myomin is an all natural formula of Chinese herbs that has been shown to help metabolize unhealthy estrogens and promote proper hormonal balance.  Studies show that it also inhibits aromatase, an enzyme that converts androgens (testosterone) into estrogen.   addition to that, it competes with estradiol at the estrogen receptors of target cells.  This is why Myomin is so effective for estrogen-dominant conditions such as cysts and fibroids (International Journal of Integrative Oncology. Mar 2008; 2(1):7-15)

Hysterectomy should only be considered as a very last form of treatment option for this condition once full understanding of the long term effects have been read and understood.

Adenomyosis usually goes away after menopause, so treatment may depend on how close you are to that stage of life.

Treatment options for adenomyosis include:

Hormone medications.
Controlling your menstrual cycle through combined estrogen-progestin oral contraceptives or through hormone-containing patches or vaginal rings may lessen the heavy bleeding and pain associated with adenomyosis. Progestin-only contraception, such as an intrauterine device containing progestin or a continuous-use birth control pill, often leads to amenorrhea — the absence of your menstrual periods — which may provide relief.

Hysterectomy.
If your pain is severe and menopause is years away, your doctor may suggest surgery to remove your uterus (hysterectomy). Removing your ovaries isn't necessary to control adenomyosis.

Although not harmful, the pain and excessive bleeding associated with adenomyosis can have a negative effect on your lifestyle.  You may find yourself avoiding activities that you previously enjoyed because you have no idea when or where you might start bleeding.  Painful periods can cause you to miss work or school and can strain relationships.  Recurring pain can lead to depression, irritability, anxiety, anger and feelings of helplessness.  That is why it is important to seek medical evaluation if you suspect you may have adenomyosis.

If you experience prolonged, heavy bleeding, chronic anemia may result.

Risk factors for adenomyosis include:

Your doctor may suspect adenomyosis based on:

In rare instances, your doctor may take a biopsy of endometrial tissue — a sample of cells from your uterine lining for testing — to verify that your abnormal uterine bleeding isn't associated with any other serious condition. However, such a biopsy won't help your doctor confirm a diagnosis of adenomyosis. The only way to be certain of a diagnosis of adenomyosis is to examine uterine tissue using a microscope after removal of the uterus (hysterectomy).

Many women have other uterine diseases that cause signs and symptoms similar to adenomyosis, making adenomyosis more difficult to diagnose. Such conditions include fibroid tumors (leiomyomas), uterine cells growing outside the uterus (endometriosis) and growths in the uterine lining (endometrial polyps). Your doctor may diagnose adenomyosis only after he or she determines there are no other causes for your signs and symptoms.

Although a blood test will not indicate whether you have adenomyosis, your doctor may suggest testing to assess your menstrual blood loss.

To reduce cramping and pelvic pain associated with adenomyosis, try these self-care measures:

Preparing for your appointment

Your first appointment will be with either your primary care physician or gynecologist.  Because appointments can be brief, and it can be difficult to remember everything you want to discuss, it is a good idea to prepare in advance of your appointment.

What you can do
Write down any symptoms you are experiencing, including those that may seem unrelated to your condition.
Make a list of any medications or vitamin supplements you take.  Write down doses and how often you take them.
Take a notebook or notepad with you.  Use it to write down important information during your visit.
Think about questions to ask your doctor.  Write down any questions, listing the most important ones first, in case time runs out.

For adenomyosis, some basic questions to ask your doctor include:

How is adenomyosis diagnosed?
How much experience do you have in diagnosing and treating adenomyosis?
What medications are available to treat endometriosis?  Is there a certain medication that can improve my symptoms?
What side effects can I expect from medication use?
Under what circumstances do you recommend surgery?
Will I take a medication before or after surgery?
Could my condition affect my ability to become pregnant?
Are there any alternative treatments I might try?
Make sure that you understand everything that your doctor tells you.  Ask your doctor to repeat information, if needed, or ask follow-up questions for clarification.

What to expect from your doctor

In the original Heath/Tulane Study in 1974, researchers delivered the equivalent of 63 marijuana cigarettes via gas mask for five minutes daily over a period of three months to monkeys, producing an effective suffocation via oxygen deprivation.  Afterward, they counted the damaged brain cells and found none.  No studies since have been able to show any effective brain damage, cancer risk (it is very different than nicotine), physiological addiction, respiratory diseases or even dangerous behavior from its use.  I refer you to an intriguing documentary movie, “The Union,” which explains this and much more in detail.  You can watch it for free online at : http://whyprohibition.ca/userblogs/buffy420/union-movie-documentary-marijuana.

For those and other reasons,  I believe marijuana can be an effective and safe answer for chronic pain relief.

In November 2010, California Proposition 19 (legalization of marijuana for all over age 21) was narrowly defeated (56 to 44 percent of votes).  However, the medical use of marijuana is still working well.  In May 2004, the full Medical Board of California finally adopted the 1996 Compassionate Use Act stating that “seriously ill Californians have the right to obtain and use marijuana for medical purposes where the medical use is deemed appropriate and has been recommended by a physician who has determined that the person’s health would benefit from the use of marijuana in the treatment of cancer, anorexia, AIDS, chronic pain, spasticity, glaucoma, arthritis, migraine, or any other illness for which marijuana provides relief.”

Pain relief is the major use of medical marijuana.   It  is endorsed by the American Academy of Family Physicians, because medical marijuana can at least reduce the need for narcotic analgesics if not eliminate them for chronic pain treatment.  There are numerous patient testimonials and some of them are at this link :   http://www.amarimed.com/TESTIMONIALS/tabid/99/Default.aspx

Cannabis produces dose-related pain relief, peaking at approximately five hours, which is comparable to codeine but lasts longer.   Medical Marijuana comes without the constipation, fatigue, addiction and lower pain threshold you suffer with codeine and other narcotics.

The scientific literature tells us that cannabis acts synergistically with opioid narcotics for control of severe pain.  Cannabis is actually an opioid-sparing agent, allowing lower doses of narcotics and fewer side effects.  It is interesting to note that clinical studies show that cannabis controls nausea, appetite and pain.

As you might expect, your brain cells have many receptor sites for cannabis.  Your  body produces cannabis-like substances, and they share the same receptor sites as Delta(9)-tetrahydrocannabinol, the main active component in cannabis.  Both your own (endogenous) cannabis-like substances and cannabis regulate multiple physiological conditions such as food intake.  They also regulate pathological conditions, such as immunomodulation, inflammation, analgesia (pain relief), cancer, addictive behavior, epilepsy and others.

What are the side effects of cannabis?  First of all, you must realize that they are minimal and they increase as you increase the dose, until you eventually get slurred speech, sedation, blurred  vision and dizziness — as you might expect.  Well, it is not a perfect analgesic, but close to it.

One last problem with cannabis:  Obtaining it legally is problematic, and it depends on where you live. In the U.S. you can secure it with a doctor’s prescription and  not be a criminal if you live in:   Alaska, Arizona, California, Colorado, Delaware, Hawaii, Maine, Michigan, Montana, Nevada, New Mexico, Oregon, Rhode Island, Vermont, New Jersey, Washington, the District of Columbia and Maryland.

First, you must find a doctor who treats with medical marijuana.

Then you must obtain a prescription or recommendation and find a dispensary.  This is not a typical pharmacy.  You need to consider if your dispensary offers quality marijuana, experienced sales services and competitive pricing.  Consider that your dosing may need to be adjusted upward until you are getting pain relief without significant side effects.