Graves' disease is an autoimmune disorder that leads to over activity of the thyroid gland (hyperthyroidism).

The thyroid gland is an important organ of the endocrine system.  It is located in the front of the neck just below the voice box.  This gland releases the hormones thyroxine (T4) and triiodothyronine (T3), which control body metabolism.  Controlling metabolism is critical for regulating mood, weight, and mental and physical energy levels.

If the body makes too much thyroid hormone, the condition is called hyperthyroidism.  (An underactive thyroid leads to hypothyroidism.)

The trigger for autoantibody production is unknown.

Since Graves' disease is an autoimmune disease which appears suddenly, often quite late in life, it is thought that a viral or bacterial infection may trigger antibodies which cross-react with the human TSH receptor (a phenomenon known as antigenic mimicry, also seen in some cases of type I diabetes.  One possible culprit is the bacterium Yersinia enterocolitica (not the same as Yersinia pestis, the agent of bubonic plague).  Although there is indirect evidence for the structural similarity between the bacterium and the human thyrotropin receptor, direct causative evidence is limited.  Yersinia seems not to be a major cause of this disease, although it may contribute to the development of thyroid autoimmunity arising for other reasons in genetically susceptible individuals.  It has also been suggested that Y. enterocolitica infection is not the cause of autoimmune thyroid disease, but rather is only an associated condition; with both having a shared inherited susceptibility.  More recently, the role for Y. enterocolitica has been disputed.

Some of the eye symptoms of hyperthyroidism are believed to result from heightened sensitivity of receptors to sympathetic nervous system activity, possibly mediated by increased alpha-adrenergic receptors in some tissues. 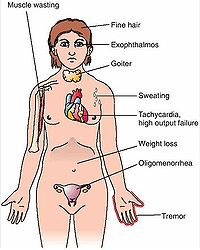 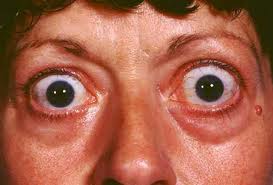 Some people may have a genetic predisposition to develop TSH receptor autoantibodies.  HLADR (especially DR3) appears to play a significant role.

1996 survey study respondents reported a significant decline in memory, attention, planning, and overall productivity from the period 2 years prior to Graves' symptoms onset to the period when hyperthyroid.  In addition, hypersensitivity of the central nervous system to low-grade hyperthyroidism can result in an anxiety disorder before other Graves’ disease symptoms emerge.  Panic disorder has been reported to precede Graves’ hyperthyroidism by 4 to 5 years in some cases, although it is not known how frequently this occurs.

The two signs that are truly 'diagnostic' of Graves' disease (i.e., not seen in other hyperthyroid conditions) are exophthalmos (protuberance of one or both eyes) and pretibial myxedema, a rare skin disorder with an occurrence rate of  1-4%,  that causes lumpy, reddish skin on the lower legs.  Graves' disease also causes goitre (an enlargement of the thyroid gland) that is of the diffuse type (spread throughout the gland).  This phenomenon also occurs with other causes of hyperthyroidism, though Graves’ disease is the most common cause of diffuse goiter.  A large goiter will be visible to the naked eye, but a smaller goiter (very mild enlargement of the gland) may be detectable only by physical exam.  Occasionally, goiter is not clinically detectable but may be seen only with CT or ultrasound examination of the thyroid.

The onset of Graves' disease symptoms is often insidious:  the intensity of symptoms can increase gradually for a long time before the patient is correctly diagnosed with Graves’ disease, which may take months or years.

Marijuana is used to treat some of the symptoms of Graves’ disease not the disease itself!  The patient needs to see an endocrinologist for a positive diagnosis.
Symptoms that can be treated with medical marijuana are:

Recommendations:  Sativa strains for daytime and Indica strains for late afternoon and evening.  Alternatively, a 50 percent sativa:50 percent indica for all day.