This article is about Episodic Dyscontrol Syndrome, or Limbic Rage.  It is a seizure-like disorder in the limbic system of the brain that causes unpredictable and often unprovoked rages.  It is (often) underestimated (in terms of the number of people who have it), understudied, under treated and untreated, unaccepted (by many professionals), misunderstood, and mislabeled.

A rage can occur with little or no provocation or warning.  Small changes in the environment can provoke massive repercussions.  Some are preceded by a mounting dysphoria (unhappy feeling) that may last for a period of hours or days.  The patient may experience hallucinations, olfactory, gustatory, visual, auditory, or multimodal before a rage.

Frequently the family members may recognize the patient's aura or anxiety state as a danger signal.  Families of the patients typically complain that they live in constant fear of inadvertently incurring wrath, while the patient lives with a fear of losing control that may verge on a panic state.

The rages themselves last from a few minutes to an hour or two, during which the patient is irrational and unreachable.  Any attempts to soothe the patient with words or actions are unsuccessful.  The (patient) display(s) a complete change of personality.  Attacks are so distinctive they are easy to distinguish from conventional ill temper.  Very often, they have a "primitive" quality to them.  Limbic rage victims frequently kick, spit, gouge, claw, and use obscene language.  It is often marked by great strength and speed, making escape difficult.  In many, a vestige of self-control remains.  This may take the form of diverting the rage away from others onto inanimate objects or the self.

If the patient is left alone, the attack usually ends in exhaustion and/or sleep, and sometimes with a sense of relief.  Upon waking, there is usually an imperfect memory of what has been said and done.  However, most patients are filled in on the details of their actions by others, and as a result, suffer a great deal of guilt and remorse.

How does rage differ from anger?  Anger is goal oriented in that it addresses a specific issue.  It is a proportional response to surrounding stimulus and is terminated by the achievement or relinquishment of the goal.  Anger can be expressed verbally and dealt with rationally.

Anger has the potential to be resolved in a non-violent manner, whereas rage almost universally expresses itself with violence.

Rage is disproportionate to, and not necessarily triggered by, an outside stimulus.  It is more intense than a display of anger.  It cannot be dealt with rationally or expressed verbally and, because it is not goal directed, it does not have a predictable conclusion.

Minimal brain dysfunction (MBD) seems to be a major contributing factor in cases of limbic rage.  Injuries to the limbic system structures in humans are often caused by a lack of oxygen, particularly at birth, by head injuries, and certain infections.

There may be a familial or hereditary component to this syndrome in some cases.  Patients may show a variety of anatomical defects that include vascular malformations and hematomas, patches of gliosis in the cortex and white matter, ectopic groups of neurons in the white matter, and multiple patches of cortical dysplasia.

Several factors can contribute to episodic dyscontrol.  (Patients with) these problems seem to be particularly sensitive to lack of rest, alcohol consumption, and hormonal changes.  These environmental stresses affect the body's ability to filter information and can induce synchronized electrical activity within the limbic system, thus setting the system up for a potential attack.

(Episodic Dyscontrol Syndrome)
Episodic dyscontrol syndrome is a recognized condition that disrupts the lives of those who suffer with it and the lives of their families.  Characterized by explosive unreasonable rage, once triggered, it is irreversible for that episode.  Some who suffer with episodic dyscontrol syndrome can control its outcome somewhat by raging over inanimate objects such as a fist through a wall, throwing furniture, or kicking car tires, while others appear to take out their rage on the supposed offender.  Unfortunately, the offender often does not know what they have done to offend because another one of the characteristics is rage disproportionate to the offense.

Episodic dyscontrol syndrome differs from anger and temper in several ways.  Anger is more appropriate to the degree of offense, and can be managed.  It can even be reasoned with and conversation is possible, and anger is often a learned behavior.  Anger and its outcome are also remembered by the angry person, and can be productive.  Episodic dyscontrol is either seizure activity, or similar to seizure activity, and the person may not remember their behavior.  They are often infused with enormous strength during the episode and there is no reasoning them out of it.  The rage itself is more primitive and has no usefulness.  Afterwards, the person is quite often remorseful and feels much guilt and shame.  He or she may also feel exhausted from the experience.

Some women reported that their attacks of rage appeared only, or mainly, in the premenstrual week.  They became depressed, paranoid, unreasonable, and aggressive.  In these cases, the symptoms cleared up with the onset of menstruation.

There are many problems with diagnosing limbic rage.  It appears that minimal brain dysfunction plays a major role in this syndrome, but the traditional adult form of neurological examination has to be expanded to include special tests for the so-called soft signs of MBD, as it is insensitive to many of the deficits found in adults.

Another technique for evaluating this disorder is the surface EEG.  This has proven to be less than accurate in detecting "deep" electrical activity.  When simultaneous depth and surface EEG recordings were performed, it was frequently observed that if a seizure occurred in the depth of the temporal lobe, the abnormal activity was usually not visible at surface recording sites.  This would imply that some temporal lobe epileptics are read as normal’s on the clinical EEG report.

It is possible for a patient to go through a whole battery of tests and show "no abnormalities".  Unfortunately, this does not mean that there is "no problem".

Limbic rage is very disruptive to the people who have it and to the people in their environment.  It is also difficult to diagnose now.  I conclude from this that many people who have it are not recognized as having it, are mislabeled as having character flaws or personality disorders, and subsequently go untreated.  In this state, they continue to wreak havoc on themselves, their families, and the people they meet.  Considering the effectiveness of treatment for this problem, I think that a heightened awareness of this condition in the medical community would go a long way to cut down the incidence of violence.

The cause of episodic dyscontrol syndrome is thought to be neurological in origin by those who have studied it.  Its second name, limbic rage, indicates its location to be deep within the primitive part of the brain, called the midbrain or limbic system.  Frank Elliott, M.D., one of the pioneers in researching this condition, indicates the cause to be minimal brain dysfunction (M.B.D.).  This can be brought on by deprivation of oxygen at birth, high fevers, infections, or trauma.  Even small traumas to the brain, like those found in sports or abuse, can cause cumulative damage.

Episodic dyscontrol syndrome is often misunderstood and not accepted.  I t is also difficult to diagnose because minimal brain dysfunction is hard to diagnose.  The most common neurological tools for diagnosis will usually miss it because it usually cannot be seen on the C.A.T. scan or M.R.I.  Surface E.E.G. usually misses it because it is a problem deep within the brain rather than the cortical surface.  Traditional neurological examinations are insensitive to the subtle deficits of minimal brain dysfunction, and an expanded evaluation of ‘soft signs’ may be the only way to determine the presence of M.B.D.

Stress and alcohol can precipitate a rage episode, so learning stress reduction techniques, avoiding stressful situations, and avoiding alcohol could help to reduce the number of episodes.  Because limbic rage is a neurological problem rather than a psychological problem, psychotherapy is of little value in changing the outbreaks.  However, counseling is helpful for family members, and for helping the affected person deal with the guilt and shame that rage creates.

Once the condition has been diagnosed as limbic rage, an organic problem, it can be treated.  Several medications have proven helpful with controlling the belligerent aggressive behaviors.  They need to be monitored by the prescribing physician until the correct one is found, as a few of them can actually increase the violence expressed in an episode.  Another approach is to treat it as a midbrain injury, and use the methods employed for neurological development, stimulating growth and repatterning of the brain.  Together, the two treatments work well; one gives relief from the debilitating and destructive behavior, while the other improves the function of the brain itself, so that, in time, it can control rage.

Characterized by impulsive sociopathic behavior, intolerance of frustration, and violence with
The patient reporting that he/she feels out of control and does not want to be violent.
There is an association with lesions of the frontal or temporal lobe.  General role of the limbic system:

The limbic system endows certain perceptions with the sense of urgency that lead to “fight or flight”.

Cannabinoids can be very helpful in the treatment of limbic rage syndrome.  The neurotransmitter dopamine is one of the brains off switches.  The endocannabinoid system is known to play a role in increasing the availability of dopamine.  Hypothesis:  that it does this by freeing up dopamine that has been bound to a transporter, thus leaving dopamine free to act by retrograde inhibition.

Inducing trauma causes an increase in production of dopamine transporter.  The dopamine transporter ties up much of the free dopamine.  With the brain having lower-than-normal free dopamine levels, there are too many neural channels open, the mid-brain is overwhelmed with stimuli and so too is the cerebral cortex.  Hard-pressed to react to this stimuli overload in a rational manner, a person responds with anger, rage, sadness and/or fear.

With the use of cannabis or an increase in the natural cannabinoids (anandamide and 2-AG), there is competition with dopamine for binding with the dopamine transporter and the cannabinoids win, making a more normal level of free dopamine available to act as a retrograde inhibitor.

This leads to increased inhibition of neural input and decreased negative stimuli to the midbrain and the cerebral cortex.  Some say that without marijuana they would kill or maim themselves or others.  Cannabis is a uniquely useful treatment.  What remains is for the chemists to determine the precise mechanism of action.  Very low ( to no) side effects with medical marijuana.  Use as an adjunct to pharmaceuticals, then begin lowering the amount of pharmaceuticals. 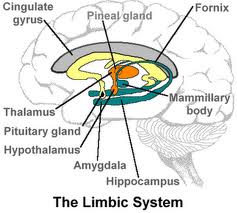