The condition of having three or more loose or liquid bowel movements per day.It is a common cause of death in developing countries and the second most common cause of infant deaths worldwide. The loss of fluids through diarrhea can cause dehydration and electrolyte imbalances.  In 2009 diarrhea was estimated to have caused  1.1 million deaths in people aged five and over and 1.5 million deaths in children under the age of five.   Oral rehydration salts and zinc tablets are the treatment of choice and have been estimated to have saved  fifty  million children in the past twenty five years.

Osmotic diarrhea occurs when too much water is drawn into the bowels.  This can be the result of maldigestion (e.g., pancreatic disease or celiac disease),  in which the nutrients are left in the lumen to pull in water.  Osmotic diarrhea can also be caused by osmotic laxatives (which work to alleviate constipation by drawing water into the bowels).  In healthy individuals, too much magnesium or vitamin C or undigested lactose can produce osmotic diarrhea and distention of the bowel.  A person who has lactose intolerance can have difficulty absorbing lactose after an extraordinarily high intake of dairy products.  In persons who have fructose malabsorption,  excess fructose intake can also cause diarrhea.  High-fructose foods that also have a high glucose content are more absorbable and less likely to cause diarrhea.  Sugar alcohols such as sorbitol (often found in sugar-free foods) are difficult for the body to absorb and, in large amounts,  may lead to osmotic diarrhea.   Osmotic diarrhea stops when offending agent (e.g. milk, sorbitol) is removed.

Exudative diarrhea  occurs with the presence of blood and pus in the stool.  This occurs with inflammatory bowel diseases, such as Crohn's disease or ulcerative colitis, and other severe infections such as E. coli or other forms of food poisoning.

Motility-related diarrhea is caused by the rapid movement of food through the intestines (hypermotility).  If the food moves too quickly through the gastrointestinal tract, there is not enough time for sufficient nutrients and water to be absorbed.  This can be due to a vagotomy or diabetic neuropathy, or a complication of menstruation.  Hyperthyroidism can produce hypermotility and lead to pseudodiarrhea and occasionally real diarrhea.  Diarrhea can be treated with antimotility agents (such as loperamide).  Hypermotility can be observed in people who have had portions of their bowel removed, allowing less total time for absorption of nutrients.

Inflammatory diarrhea occurs when there is damage to the mucosal lining or brush border, which leads to a passive loss of protein-rich fluids, and a decreased ability to absorb these lost fluids.  Features of all three of the other types of diarrhea can be found in this type of diarrhea.  It can be caused by bacterial infections, viral infections, parasitic infections, or autoimmune problems such as inflammatory bowel diseases.  It can also be caused by tuberculosis, colon cancer, and enteritis 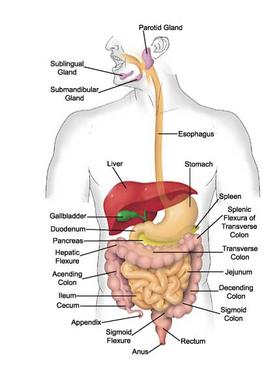 Generally, if there is blood visible in the stools, it is not diarrhea, but dysentery.  The blood is trace of an invasion of bowel tissue.  Dysentery is a symptom of, among others, Shigella, Entamoeba histolytica, and Salmonella.

Diagram of the human gastrointestinal tract.

Diarrhea is most commonly due to viral gastroenteritis with rotavirus, which accounts for forty percent of cases in children under five.   In travelers however,  bacterial infections predominate.   Various toxins such as mushroom poisoning and drugs can also cause acute diarrhea.

The bacterium Campylobacter is a common cause of bacterial diarrhea, but infections by Salmonellae, Shigellae and some strains of Escherichia coli (E.coli) are frequent.

In the elderly, particularly those who have been treated with antibiotics for unrelated infections, a toxin produced by Clostridium difficile often causes severe diarrhea.

Parasites do not often cause diarrhea except for the protozoan Giardia, which can cause chronic infections and severe diarrhea.

Other infectious agents such as parasites and bacterial toxins also occur.   In sanitary living conditions where there is ample food and a supply of clean water, an otherwise healthy person usually recovers from viral infections in a few days.  However, for ill or malnourished individuals, diarrhea can lead to severe dehydration and can become life-threatening.

Malabsorption is the inability to absorb food fully, mostly from disorders in the small bowel, but also due to maldigestion from diseases of the pancreas.

The two overlapping types here are of unknown origin:

Irritable bowel syndrome:
Another possible cause of diarrhea is irritable bowel syndrome (IBS) which usually presents with abdominal discomfort relieved by defecation and unusual stool (diarrhea or constipation) for at least 3 days a week over the previous  three months.   Symptoms of diarrhea-predominant IBS can be managed through a combination of dietary changes, soluble fiber supplements, and/or medications such as loperamide or codeine.  About thirty percent  of patients with diarrhea-predominant IBS have bile acid malabsorption diagnosed with an abnormal SeHCAT test.

In many cases of diarrhea, replacing lost fluid and salts is the only treatment needed. This is usually by mouth – oral rehydration therapy – or, in severe cases, intravenously.[1] Diet restrictions such as the BRAT diet are no longer recommended.  Research does not support the limiting of milk to children as doing so has no effect on duration of diarrhea.

Medications such as loperamide (Imodium), bismuth subsalicylate may be beneficial, however they may be contraindicated in certain situations

Cannabinoids stop diarrhea, little or no side effects:

Cannabinoid receptor agonists delay gastric emptying in humans as well as in rodents, and they may also inhibit human gastric acid secretion.

It is also worth noting that there have been a number of anecdotal accounts of the effective use of cannabis in the past against dysentery and cholera.   The major active constitutent of the plant Cannabis sativa (marijuana), THC, and a variety of natural and synthetic cannabinoids have been shown to possess anti-inflammatory activities

Results indicate that the endogenous cannabinoid system represents a promising therapeutic target for the treatment of intestinal disease conditions characterized by excessive inflammatory responses. Cannabis is an adaptogenic immune system modulator that can increase or decrease immune systems function in ways that almost always contribute to healthier outcomes.

The use of medical marijuana to treat digestive system problems is time-tested, and is usually a safer intervention than the use of pharmaceutical drugs or surgery.

The plant can be used to treat a variety of diseases and symptoms related to the gastrointestinal system.

Cannabis has been used for centuries in the medicinal treatment of gastrointestinal disorders.   Dr. Anita Holdcroft of Hammersmith Hospital has reported the results of a placebo-controlled trial of cannabis in a patient with severe chronic pain of gastrointestinal origin

The patient's demand for morphine was substantially lower during treatment with cannabis than during a period of placebo treatment.

Studies indicate that cannabinoids in marijuana bind with cannabinoid receptors in the digestive tract, especially the small and large intestine, causing muscle relaxation, reduction of inflammation, analgesia, increased nerve-muscle coordination, anti-emesis, and relief of spasms such as those that cause diarrhea.

Control of secretory diarrhea  and colorectal cancer growth by cannabinoids in the gut.

These findings show that Cannabinoids  inhibit neurally mediated secretion via Cannabinoid CB1-receptors and may be useful in some forms of diarrhea.