Cystic fibrosis is an inherited disease that causes thick, sticky mucus to build up in the lungs and digestive tract.  It is one of the most common chronic lung diseases in children and young adults, and may result in early death.

Cystic fibrosis (CF) is caused by a defective gene which causes the body to produce abnormally thick and sticky fluid, called mucus.  This mucus builds up in the breathing passages of the lungs and in the pancreas, the organ that helps to break down and absorb food.
This collection of sticky mucus results in life-threatening lung infections and serious digestion problems. The disease may also affect the sweat glands and a man's reproductive system. 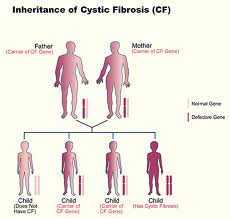 Millions of Americans carry the defective CF gene, but do not have any symptoms.  That's because a person with CF must inherit two defective CF genes one from each parent.  An estimated 1 in 29 Caucasian Americans have the CF gene.  The disease is the most common, deadly, inherited disorder affecting Caucasians in the United States.  It's more common among those of Northern or Central European descent.
Most children with CF are diagnosed by age 2.  A small number, however, are not diagnosed until age 18 or older.  These patients usually have a milder form of the disease.

Because there are more than 1,000 mutations of the CF gene, symptoms differ from person to person.

Symptoms in newborns may include:

Symptoms related to bowel function may include:

Symptoms related to the lungs and sinuses may include:

Symptoms in someone with cystic fibrosis include:

An early diagnosis of CF and a comprehensive treatment plan can improve both survival and quality of life. Follow-up and monitoring are very important. If possible, patients should be cared for at cycstic fibrosis specialty clinics, which can be found in many communities. When children reach adulthood, they should transfer to a cystic fibrosis specialty center for adults.
Treatment for lung problems includes:

Treatment for bowel and nutritional problems  may include:

Care and monitoring at home should include:

Most children with cystic fibrosis are fairly healthy until they reach adulthood. They are able to participate in most activities and should be able to attend school. Many young adults with cystic fibrosis finish college or find employment.
Lung disease eventually worsens to the point where the person is disabled. Today, the average life span for people with CF who live to adulthood is approximately 35 years, a dramatic increase over the last three decades.
Death is usually caused by lung complications.
The most common complication is chronic respiratory infection.

First recognized in the 1930's,  CF  is caused by a mutation in the gene for the protein cystic fibrosis transmembrane conductance regulator (CFTR).  This gene is required to regulate the components of sweat, digestive juices, and mucus  although most people without CF have two working copies of the CFTR gene, only one is needed to prevent cystic fibrosis.  CF develops when neither gene works normally and therefore has autosomal recessive inheritance.   CF is most common among Caucasians;  one in 25 people of European descent carry one allele for CF.   Ireland has both the highest incidence of CF in the world;  2.98 per 10,000 - and the highest carrier rate in the world with 1 in 19 individuals classed as carriers.  Cystic fibrosis is Ireland's most common life-threatening inherited disease.

Approximately 30,000 Americans have CF, making it one of the most common life-shortening inherited diseases in the United States.  Individuals with cystic fibrosis can be diagnosed before birth by genetic testing, or by a sweat test in early childhood.   Ultimately, lung transplantation is often necessary as CF worsens.   Infertility affects both men and children.   At least 97% of men with cystic fibrosis are infertile, but not sterile and can have children with assisted reproductive techniques.   These men make normal sperm but are missing the tube (vas deferens),  which connects the testes to the ejaculatory ducts of the penis.   Many men found to have congenital absence of the vas deferens during evaluation for infertility have a mild,  previously undiagnosed form of CF.   Some women have fertility difficulties due to thickened cervical mucus or malnutrition. In severe cases,  malnutrition disrupts ovulation and causes amenorrhea. People with CF often develop clubbing of their fingers and toes due to the effects of chronic illness and low oxygen in their tissues.    Cystic fibrosis related diabetes (CFRD) shares characteristics that can be found in Type 1 and Type 2 diabetics,  and is one of the principal non-pulmonary complications of CF.   Poor uptake of vitamin D from the diet because of malabsorption can lead to the bone disease osteoporosis in which weakened bones are more susceptible to fractures.

The lungs of individuals with cystic fibrosis are colonized and infected by bacteria from an early age.  These bacteria, which often spread among individuals with CF, thrive in the altered mucus, which collects in the small airways of the lungs.   This mucus leads to the formation of bacterial microenvironments known as biofilms that are difficult for immune cells and antibiotics to penetrate.   Viscous secretions and persistent respiratory infections repeatedly damage the lung by gradually remodeling the airways which makes infection even more difficult to eradicate.    Over time, both the types of bacteria and their individual characteristics change in individuals with CF.   In the initial stage, common bacteria such as Staphylococcus aureus and Hemophilus influenzae colonize and infect the lungs.   Eventually, Pseudomonas aeruginosa (and sometimes Burkholderia cepacia) dominates.   By 18 years of age,  80%  of patients with classic CF harbor P. aeruginosa, and 3.5% harbor B. cepacia.    Once within the lungs, these bacteria adapt to the environment and develop resistance to commonly used antibiotics.   Pseudomonas can develop special characteristics that allow the formation of large colonies, known as "mucoid" Pseudomonas, which are rarely seen  in people that do not have CF.    One way in which infection has spread is by passage between different individuals with CF.    In the past, people with CF often participated in summer "CF Camps" and other recreational gatherings.    Hospitals grouped patients with CF into common  areas and routine equipment (such as nebulizers)  were not sterilized between individual patients.    This led to transmission of more dangerous strains of bacteria among groups of patients.    As a result,  individuals with CF are routinely isolated now and health care persons should wear disposable gowns, masks and gloves.

A number of physiological mechanisms of cannabinoids and endocannabinoids coincide with the pathology of CF.  Thus it is suggested that potential benefits from THC treatment, in addition to appetite stimulation, will include antiemetic, bronchodilating, anti-inflammatory, anti-diarrheal and hypo-analgesic effects.
Cannabinoids may just possibly counteract almost all of the symptoms of Cystic Fibrosis.  It should be administered orally from a whole plant extract or vaporized.