Darier disease is a skin condition characterized by wart-like blemishes on the body.  The blemishes are usually yellowish in color, hard to the touch, mildly greasy, and can emit a strong odor.  The most common sites for blemishes are the scalp, forehead, upper arms, chest, back, knees, elbows, and behind the ear. The lesions have a sandpaper texture (raised and rough).
The mucous membranes can be affected, with blemishes on the roof of the mouth (palate), tongue, inside of the cheek, gums, and throat.  Other features of Darier disease include nail abnormalities, such as red and white streaks in the nails with an irregular texture, and small pits in the palms of the hands and soles of the feet.

The wart-like blemishes of Darier disease usually appear in late childhood to early adulthood.  The severity of the disease varies over time;  affected people experience flare-ups  alternating with periods when they have fewer blemishes.  The appearance of the blemishes is influenced by environmental  factors.  Most people with Darier disease will develop more blemishes during the summertime when they are exposed to heat and humidity.  UV light;  minor injury or friction, such as rubbing or scratching;  and ingestion of certain medications can also cause an increase in blemishes.

How do people inherit Darier disease?

This condition is inherited in an autosomal dominant pattern, which means one copy of the altered gene in each cell is sufficient to cause the disorder.
In some cases, an affected person inherits the mutation from one affected parent.  Other cases may result from new mutations in the gene.  These cases occur in people with no history of the disorder in their family.
The linear form of Darier disease is generally not inherited but arises from mutations in the body's cells that occur after conception.  These alterations are called somatic mutations.  Mutations of the ATP2A2 gene are responsible for Darier disease. 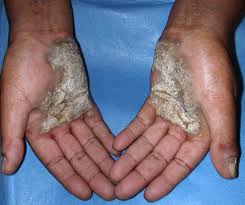 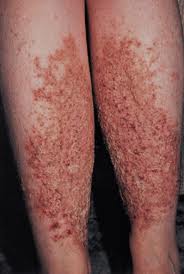 The disorder is caused by a mutation in the gene ATP2A2.   Family members with confirmed identical ATP2A2 mutations can exhibit differences in the clinical severity of disease, suggesting that other genes or environmental factors affect the expression of Darier's disease.  With the discovery of the ATP2A2 gene, performing genetic tests to confirm the diagnosis of Darier's disease is now possible.

Most patients will develop signs of the disease (even if subtle) before the age of 30 years.  Many patients will have a mild form of the disease that, although present, will go unnoticed throughout life.  Patients with more severe disease will notice a chronic relapsing-remitting pattern to their signs and symptoms although cases of spontaneous resolution of signs have been reported.  The rash is often exacerbated by sunlight (a reaction which may be delayed  eg. on return from holiday), and occasionally by corticosteroid use (although this may be useful for other patients).  Bacterial infection can cause flares.  Widespread infection of the skin with the herpes simplex (coldsore) virus is a well recognised complication called eczema herpeticum.  This can cause a severe flare and patients can feel quite unwell.  In most patients general health remains good regardless of the severity of the disease.

Secondary bacterial infection (usually due to Staphylococcus aureus) should be treated with antibiotics, and herpes simplex with antiviral agents.

If symptoms are particularly severe then a trial of an oral retinoid medication such as acitretin or isotretinoin may be effective but these drugs may have troublesome side effects.  Ciclosporin has been reported to be effective in a few patients.

Cannabinoids May Be Helpful in Treating Darier’s Disease

Pharmaceutical Agent for Treatment of Inflammatory and Hereditary Keratoderma including Darier’s Disease and Psoriasis.

These actions are useful for a prevention and/or a treatment for skin diseases induced by abnormality of calcium metabolism in epidermal keratinocyte such as Darier's disease and also useful for a variety of skin diseases those are characterized by the hyperkeratosis and accelerated mitosis including psoriasis.

With regard to the cannabinoid agonists, Japanese Patent Unexamined Publication (KOKAI) No. 2000-256323 discloses cannabinoid agonists having an immuno-regulatory action, anti-inflammatory action, and anti-allergic action, and Japanese Patent Unexamined Publication based on International Patent Application (KOHYO) .  Cannabinoids are useful for therapeutic treatment of diseases relating to abnormality of peripheral cannabinoid receptors, and specifically, discloses that they can be used for diseases accompanied by dysalgesia, multiple sclerosis, diseases accompanied by abnormality of intraocular pressure, and chronic degenerative disorders such as chronic respiratory disorder, senile dementia, and Alzheimer's disease.  Japanese Patent Unexamined Publication No. 5-345722 discloses that N-palmitoyl-ethanolamide(palmidrol) as a cannabinoid agonist is useful as a therapeutic agent for autoimmune diseases such as atopic dermatitis and dermatomyositis.

In particular, it is known that, in Darie's disease, an expression amount of ATP2A2 protein is reduced to about half of that observed in healthy persons.  By the administration of the medicament of the present invention to a Darie's disease patient, an expression amount of ATP2A2 protein from the basal layer to the spinous layer of keratinocytes can be increased, and as a result, the onset of Darie's disease can be prevented, or treatment of Darie's disease for improvement, amelioration or the like of the symptoms can be performed.  Although the medicament of the present invention has high effectiveness especially on Darie's disease, said medicament also has effectiveness on abnormal skin keratinization diseases induced by abnormal calcium metabolism in the keratinocytes due to abnormal expression of the calcium pump in the keratinocytes, for example, Hailey-Hailey disease and the like.

Cholestasis, a reduction of bile flow, results from a variety of hepatic as well as extrahepatic diseases. Although the pathophysiologic link between cholestasis and pruritus is not fully understood, it may be a consequence of increased levels of endogenous opioids.  Pruritus of cholestasis is typically widespread, characteristically involves the palms and soles, and may be accompanied by jaundice.  Therapeutic interventions have focused on the removal of presumed pruritogens from the circulation (through the use of ursodeoxycholic acid, cholestyramine), induction of hepatic enzymes (rifampin), antagonism of endogenous  opioid receptors (naltrexone, nalaxone, nalmefene), modulation of serotonin neurotransmission (sertraline), activation of cannabinoid receptors (dronabinol), and clearing water-soluble and protein-bound pruritogens through albumin-based dialysis (Molecular Adsorbent Recycling System, Prometheus). Ultraviolet B phototherapy and parenteral lidocaineare further