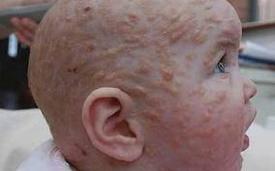 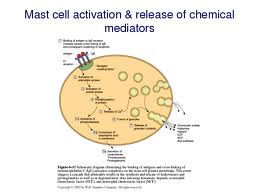 Mastocytosis is a group of rare disorders of both children and adults caused by the presence of too many mast cells (mastocytes) and CD34+ mast cell precursors in a person's body.
Mastocytosis can occur in a variety of forms:

Other types of mast cell disease include:

When too many mast cells exist in a person's body and undergo degranulation, the additional chemicals can cause a number of symptoms which can vary over time and can range in intensity from mild to severe. Because mast cells play a role in allergic reactions, the symptoms of mastocytosis often are similar to the symptoms of an allergic reaction. They may include, but are not limited to:

Mast cells are located in connective tissue, including the skin, the linings of the stomach and intestine, and other sites.  They play an important role in helping defend these tissues from disease.  By releasing chemical "alarms" such as histamine,  mast cells attract other key players of the immune defense system to areas of the body where they are needed.

Mast cells seem to have other roles as well.  Because they gather together around wounds,  mast cells may play a part in wound healing.  For example, the typical itching felt around a healing scab may be caused by histamine released by mast cells.  Researchers also think mast cells may have a role in the growth of blood vessels (angiogenesis).  No one with too few or no mast cells has been found, which indicates to some scientists we may not be able to survive with too few mast cells.

Mast cells express a cell surface receptor, c-kit[4] (CD117), which is the receptor for stem cell factor (scf).  In laboratory studies, scf appears to be important for the proliferation of mast cells.  Mutations of the c-kit receptor, leading to uncontrolled stimulation of the receptor, is a cause for the disease.  Inhibiting the tyrosine kinase receptor with imatinib may reduce the symptoms of mastocytosis.

Doctors can diagnose urticaria pigmentosa (cutaneous mastocytosis, see above) by seeing the characteristic lesions that are dark-brown and fixed. A small skin sample (biopsy) may help confirm the diagnosis.

By taking a biopsy from a different organ, such as the bone marrow, the doctor can diagnose systemic mastocytosis.  Using special techniques on a bone marrow sample, the doctor looks for an increase in mast cells.  Another sign of this disorder is high levels of certain mast-cell chemicals and proteins in a person's blood and sometimes in the urine.

No one is sure how many people have either type of mastocytosis, but mastocytosis generally has been considered to be an "orphan disease" (orphan diseases affect 200,000 or fewer people in the United States). Mastocytosis, however, often may be misdiagnosed, especially because it typically occurs secondary to another condition, and thus may occur more frequently than assumed.

There is currently no cure for mastocytosis, but there are a number of medicines to help treat the symptoms:

In rare cases in which mastocytosis is cancerous or associated with a blood disorder, the patient may have to use steroids and/or chemotherapy.  The novel agent imatinib (Glivec or Gleevec) has been found to be effective in certain types of mastocytosis.
There are clinical trials currently underway testing stem cell transplants as a form of treatment.  There are support groups for persons suffering from mastocytosis.  Involvement can be emotionally therapeutic for some patients.

Distribution of cannabinoid receptor 1 (CB1) and 2 (CB2) on sensory nerve fibers and adnexal structures in human skin.
Cannabinoid receptors mediate the psychopharmacological action of marijuana and have been localized in the central and peripheral nervous system as well as on cells of the immune system.

Cannabinoid modulation of immune responses is a pathological consequence of marijuana abuse and a potential outcome of therapeutic application of the drug. Moreover, endogenous cannabinoids are physiological immune regulators. In the present report, we describe alterations in gene transcription that occur after cannabinoid exposure in a mast cell line, RBL2H3. Cannabinoid exposure causes marked changes in the transcript levels for numerous genes, acting both independently of and in concert with immunoreceptor stimulation via Fc epsilon RI. In two mast cell lines, we observed mRNA and protein expression corresponding to both CB1 and CB2 cannabinoid receptor isoforms, contrary to the prevailing view that CB1 is restricted to the CNS. We show that coexpression of the two isoforms is not functionally redundant in mast cells. Analysis of signaling pathways downstream of cannabinoid application reveals that activation of extracellular signal-regulated kinase, AKT, and a selected subset of AKT targets is accomplished by CB2 ligands and nonselective CB1/CB2 agonists in mast cells. CB1 inhibition does not affect AKT or extracellular signal-regulated kinase activation by cannabinoids, indicating that CB2 is the predominant regulatory receptor for these kinases in this cell context. CB1 receptors are, however, functional in these mast cells, since they can contribute to suppression of secretory responses.

Cannabinoids Reportedly Kill Cancer
This is called apoptosis, or programmed cell death. That process fails to work in tumors. THC promotes its reappearance so that gliomas, leukemias, melanomas and other cell types will in fact heed the signals, stop dividing, and die.”

Cannabinoids and the immune system. Of men, mice and cells


The medical use of cannabis or cannabinoid compounds is controversial. Cannabinoids like the Delta(9)-THC (tetrahydrocannabinol) or the synthetic derivative Nabilone are available against cancer- and HIV-associated cachexia, nausea and vomiting. Over the last 20 years, the cannabinoid receptors CB(1) and CB(2) and their endogenous ligands have been found. The involvement of this endogenous cannabinoid signalling system in feeding, appetite, pain perception and immunomodulation could be demonstrated using animal and in vitro studies. Thus, the concern about immunosuppressive effects in humans using medical cannabinoid preparations grew. However, up to now most human studies have failed to demonstrate a well-defined and reproducible immunosuppressive cannabinoid-effect. Only the smoking of marijuana showed a significant local immunosuppression of the bactericidal activity of human alveolar macrophages. In animal studies, cannabinoids were identified as potent modulators of cytokine production, causing a shift from Th1 to Th2 cytokines. In consequence, a compromised cellular immunity was observed in these animals, resulting in enhanced tumor growth and reduced immunity to viral infections. In vitro, immunosuppressive effects were shown in all immune cells, but only at high micromolar cannabinoid concentrations not reached under normal clinical conditions. In conclusion, there is no evidence that cannabinoids induce a serious, relevant immunosuppression in humans, with the exception of marijuana-smoking which may affect local broncho-alveolar immunity.

Effect of Cannabinoid System and Cannabimimetic Compounds in the Control of Mast Cells
The present work aims to elucidate the emerging role played by cannabimimetic compounds in the control of mast cell activation. Mast cells are immune competent cells strategically located at sites directly interfacing with the external environment which, in case of injury, may regulate the immune response by the release of a plethora of both pre-formed and newly-synthesised mediators. However, although the main goal of mast cell activation is to initiate the inflammatory reaction, and thus to maintain internal homeostasis, the consequences of deregulated mast cell activation could led to chronically activate the inflammatory response, as it occurs in arthritis, inflammatory bowel diseases, atherosclerosis and asthma. Therefore, much effort has been made to develop compounds able to regulate mast cell degranulation. Several evidences suggested that cannabinoids as well palmitoylethanolamide (PEA), a fatty acid amide sharing several biological activities with cannabinoids, are considered as an emerging class of modulators of mast cell behaviour. We, firstly, focus our study on the effect of cannabimimetic compounds in the control of mast cell isolated both from human biopsies of endometritis and from rats and appropriately stimulated in vitro. Since to study mast cell functionality in vitro is sometime inappropriate in view of the considerable degree of mast cell heterogeneity, both in respect to their morphology, expression of proteins and, primarily, in respect to their different sensitivity to stimuli, therefore the study continued in an animal model of mast cell dependent chronic inflammation, as granuloma. The activation of endocannabinoid system or the up-regulation of PEA tone significantly reduced granuloma formation in rat through the control of mast cell activation preceding the release of pro-inflammatory and pro-angiogenic mediators. Moreover, our data evidenced that mast cells modulation by PEA resulted useful also in the management of pain associated to granuloma-formation. In fact PEA, through the control of the recognized “cross-talk” existing between mast cell-nerves, reduced mechanical allodynia in inflamed rats. These data are in well accordance with recently described deregulation of the neuro-immune axis occurring in the aetiology of inflammatory disease. The cannabimimetic control of neuro-immune axis was finally studied in a model of acute intestinal inflammation in mice. The administration of cannabidiol in septic mice, by the blockage of fatty acid amide hydrolase, prevented the activation of enteric glial cells in parallel to the immune cells (mast cell and macrophages) activation. The control of neuro-immune axis by cannabidiol finally resulted in its anti-inflammatory and protective effect in septic mice. According to the here reported evidences for a cannabimimetic control of mast cell, it is reasonable to propose these compounds, including PEA and its congeners, as possible candidate for treating several acute and chronic inflammatory diseases, recognizing in mast cell activation a common origin, such as dermatitis, inflammatory gastrointestinal syndrome and granuloma formation.

Anti-inflammatory potential of CB1-mediated cAMP elevation in mast cells
Cannabinoids are broadly immunosuppressive, and anti-inflammatory properties have been reported for certain marijuana constituents and endogenously produced cannabinoids. The CB2 cannabinoid receptor is an established constituent of immune system cells, and we have recently established that the CB1 cannabinoid receptor is expressed in mast cells. In the present study, we sought to define a role for CB1 in mast cells and to identify the signalling pathways that may mediate the suppressive effects of CB1 ligation on mast cell activation. Our results show that CB1 and CB2 mediate diametrically opposed effects on cAMP levels in mast cells. The observed long-term stimulation of cAMP levels by the Galpha(i/o)-coupled CB1 is paradoxical, and our results indicate that it may be attributed to CB1-mediated transcriptional regulation of specific adenylate cyclase isoenzymes that exhibit superactivatable kinetics. Taken together, these results reveal the complexity in signalling of natively co-expressed cannabinoid receptors and suggest that some anti-inflammatory effects of CB1 ligands may be attributable to sustained cAMP elevation that, in turn, causes suppression of mast cell degranulation.