The Medical Marijuana Industry Says Seniors Are The Next Big Market

The Medical Marijuana Industry Says Seniors Are The Next Big Market 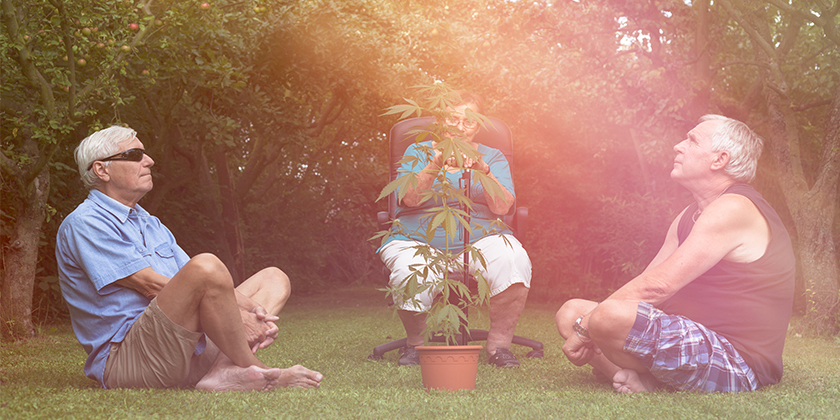 Even though almost two-thirds of Americans are in favor of legalized marijuana, most of the people who are portrayed as marijuana users are younger, alt-looking individuals. So, it may come as a shock that the fastest growing subset of marijuana users are America’s senior citizens.

A recent federal survey indicated that 9% of adults aged 50-64 and around 3% of adults older than 65 have used marijuana within the last year. This is more than double the reported percentage as early as 10 years ago. And in nearly all cases, these “new” users reported having first tried marijuana when they were 21 or younger.

Why The Uptick in Senior Consumption?

Many of the participating seniors indicated that their consumption decreased dramatically or stopped altogether for fear of legal repercussions. But, now that nine states and the District of Columbia have legalized both recreational and medical marijuana, that fear is now gone.

Marijuana breeding has also significantly increased since the times of Woodstock. Marijuana sold by a reputable source is more likely to give the desired effect consistently and safely, leading seniors to feel less hesitant to try it again. And now, there are a multitude of ways to consume, from edibles to wax to tinctures. Smoking and oddly-flavored baked goods can be a thing of the past.

How Consumption Changes With Age

Dispensaries and medical marijuana prescribers are also indicating that while consumption is up among senior citizens, the way they consume has changed quite a bit. In an interview with the Huffington Post, John Sudderth, director of inventory at the Colorado-based dispensary Lightshade Dispensary, gave some insight as to why that is.

“We believe this demographic consumes less frequently than average. They like to take smaller doses, also,” he said. That would confirm a BDS Analytics study predicting the increased sales of edibles containing micro-doses of THC, and dissolvable products such as patches for those seniors that no longer enjoy the feeling of smoke in their lungs.

Where Are Seniors Getting Their Information?

Dispensaries like Colorado-based Lightshade Dispensary, are finding success in marketing to local nursing homes and medical care facilities that care for those with chronic pain, glaucoma, and other ailments that tend to favor those in the senior community.

“The oldsters have seen it before, haven’t done it in decades and will be open to it again,” said John Sudderth, director of inventory for Lightshade Dispensary said. “Plus, the health focus of baby boomers will drive medical use for years to come.”

But senior communities and advertising isn’t the way the word is getting out. About 15 percent of users aged 50 to 64 and 23 percent of those 65 and older said a doctor had recommended it to them. Some physicians like Dr. Tim Brennan, director of the Addiction Institute at Mount Sinai West and Mount Sinai St. Luke’s Hospitals, both in New York City, had a warning for those that might begin using marijuana again.

Today’s marijuana is much more potent, and age can alter how your body reacts to a drug, he explained. “They might have been able to handle it then, but that doesn’t mean they can handle it now,” Palamar said. “It may not hit you the same way when you’re in your 60s, if you haven’t used it in decades.”

MedicalMarijauna.com suggests that if you are taking any medication, consult your doctor before consuming marijuana in case of any potential interactions.

Are you a senior citizen rediscovering medical or recreational marijuana? Leave a comment just below or at Facebook or @mmdotcom.