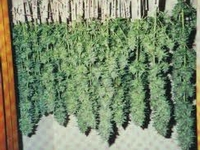 Forget about watering the zucchini: A new game for Facebook will let you tend your marijuana plants instead.

In the game, players can visit different locations to buy different kinds of pot, such as “Jamaican Ganja” or “Schwag Weed.” Users plant their purchased seeds, raise the seedlings and harvest a mature crop. Then, users set prices for their pot and send it along to a hoodie-clad dealer to distribute the goods. Players can even buy bongs, televisions, and other accessories. As with Facebook’s other successful games, players can also spend real-world money to buy digital game points.

Businessweek reports that players will receive game tips from Andy Botwin, a character from the “Weeds” show. The game may also become a testing ground for new characters and plot points that could air on television.

“In the social realm, it’s a living, breathing experience,” Curt Marvis, producer of Weeds, told Businessweek, “one where you get a fan base of engaged users.”

The “Weeds” game has been approved by Facebook, and its creators say it does not break any laws. The game’s developer, Ecko Code, also plans to launch more games based on other Showtime hits, including “Dexter.”