The Trichome by Matt Rize

The Trichome by Matt Rize

Cannabis has special trichomes to say the least. The resin within these trichomes has encouraged our ancestors to work with this plant for millennia, spreading the seeds world wide. Cannabis resin contains strong smelling medicinal compounds that glisten in the sun to call extra attention. Trichomes, the resin gland heads, protect the cannabis plant from insects and predation by being sticky and intoxicating. Trichomes also protect growing seeds from the sun and wind by reflecting solar radiation and creating a physical barrier. The medicinal and psychoactive compounds in cannabis that we love are contained within the trichomes, as resin.

The Cannabinoids and Terpenoids in Resin:

Cannabis resin includes: cannabinoids (THC, CBD, CBN, THC-V, over 90 discovered so far!), terpenoids (smell and “high” modulation), and plant waxes/oils. One group of cannabinoids, the THC group, is primarily responsible for the psychoactive properties of cannabis. Although, without the other cannabinoids and terpenoids, pure THC is a boring high, according to Sam Skunkman. I’m don’t know this from experience yet.

Most Cannabis varieties today can be classified by chemotype as: high THC/low CBD. Now that medical marijuana is being lab tested (ie www.steephilllab.com ), other chemotypes are being discovered and propagated. A good reference for CBD information is www.projectCBD.org. Recently, a version of “Jack the Ripper” by http://www.tgagenetics.com showed a substantial concentration of THCV. GW Pharmaceuticals has worked with THCV, inbreeding a variety with THCV in high levels that also lacks THC and CBD. Here is their Phase 1 study of THCV as a treatment for obesity and associated metabolic disorders. www.gwpharm.com/Metabolic%20Disorders.aspx

I will let cancer.gov tell us more about cannabinoids as medicine:

“Cannabinoids are a group of 21 carbon terpenophenolic compounds produced uniquely by Cannabis sativa and Cannabis indica species.[1,2] These plant-derived compounds may be referred to as phytocannabinoids. Although delta-9-tetrahydrocannabinol (THC) is the primary psychoactive ingredient, other known compounds with biologic activity are cannabinol, cannabidiol (CBD), cannabichromene, cannabigerol, tetrahydrocannabivirin (THCV), and delta-8-THC. Cannabidiol (CBD), in particular, is thought to have significant analgesic and anti-inflammatory activity without the psychoactive effect (high) of delta-9-THC.”

What is a trichome? 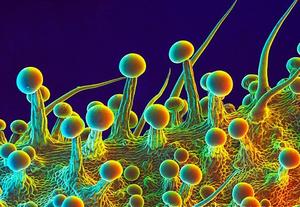 Resin glands are capitate stalked trichomes that go from clear to cloudy to amber when maturing. Within the gland heads lie the cannabinoids: THC, THCV, CBD, CBN, CBC, CGN, and some 90 other identified other cannabinoids. Also contained in the resin gland heads are terpenoids. Terpenoids are responsible for smell and modulate the “high” and medicinal properties of cannabis. These mature trichomes can vary in size from 25 to 220 microns, this varies widely depending on environment and genetics.

To attain the most potent concentration of resin, via natural methods, only the mature resin gland heads can be collected. This is somewhere in the 60-100 micron range for hybrids. But this varies greatly, and depends on many factors including the oil soluble terpenoids, plant waxes/oils, plant size, and environmental conditions of the grow. A detailed description of trichomes can be found here:
www.nationmaster.com/encyclopedia/Trichome 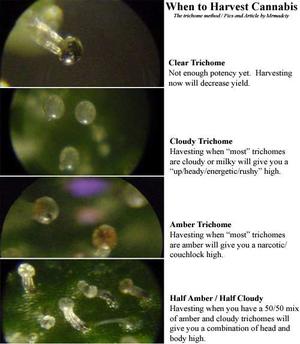 The Cannabis trichome serves multiple functions. It protects the plant from predation, desiccation, and radiation. The trichome also calls to mankind, and has seduced us to spread the Cannabis plant to every corner of the earth. The cannabinoids, terpenoids, and other compounds within the these resin gland heads have proven to help the human race with a multitude of debilitating and degenerative conditions. Cannabinoid research has only scratched the surface of the medicinal benefits of trichome. The ailments statistically proven to be aided by cannabinoids will surely grow. Rize UP!