Shame on you Paul Chabot

You, Paul Chabot, are an unashamed supporter of the longest, most costly, and most futile war in American history. The prejudices and fears that you exhibit bear scant relation to reality. As a self-appointed hypocritical moralist you have aligned yourself with terrorists, criminals and all the other scum of the earth – such as political demagogues, corrupt government agencies, fear-mongering, soulless media moguls, and all other forces of ignorance and arrogance. 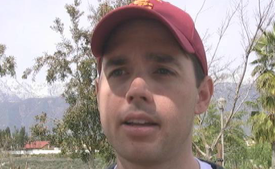 How is it even possible that you fail to understand that prohibition – just like it's counter-part in the 1920s – has created massive amounts of destruction to all aspects of our society?

How can you not desire a saner policy, one that's based on facts rather than reefer madness?

And how dare you refuse to help undo the massive amount of damage caused by this dangerous and failed policy?

Chabot, your beloved Prohibition has finally run it's course. The lives and livelihoods of tens of millions of Americans have been destroyed or severely disrupted, and what was once a shining beacon of liberty and prosperity has become a toxic, repressive, smoldering heap of hypocrisy and a gross affront to fundamental human decency.

Do you honestly believe that the rest of us are willing to sacrifice even more of our precious hard-earned tax dollars and civil liberties on the pointless exercise of whacking ourselves with ever-bigger and more-repressive prohibition hammers? – While we all plunge deeper into Loserville, drug use is going up, not down!

In spite of what you may erroneously believe, it's quite clear to the rest of us that it's you Paul Chabot, and not a single one of these 35,000 highly respected and principled, Californian physicians, who is guilty of dishonorable supporting organized criminals and international terrorists.