Prohibitionists clearly owe us all an explanation

If you are a prohibitionist then you owe us answers to the following ten questions:

#1. Why do you rejoice at the fact that we have all been stripped of our 4th amendment rights and are now totally subordinate to a corporatized, despotic government with a heavily armed and corrupt, militarized police force whose often deadly intrusions into our homes and lives are condoned by an equally corrupt and spineless judiciary?

Jose, an Iraq veteran of two tours, believing that his family was in grave danger, grabbed his AR-15 rifle while instructing his wife and child to take refuge in a closet. The officers entered, and seeing Jose at the far end of the long, dark  hallway, fired off more than 70 rounds in under 10 seconds. Paramedics were then refused access to Guerena for more than hour while he bled to death on the floor of the loving family home he died defending.

* Although the Sheriff's Department initially claimed that Guerena had fired his weapon first, they later admitted that the gun had not been fired and that even the safety catch was still on.

* 26 year old Jose Guerena did not have a criminal record, and nothing illegal was found in his home.

This week I also spoke with Ray Epps, a retired Marine sergeant from Mesa, Arizona and president of the Arizona chapter of Oath Keepers, the controversial organization of police and military personnel who have vowed not to enforce laws they believe are unconstitutional. After hearing about Guerena's death, Epps drove to Tucson to investigate.

"We spoke with several of the neighbors," Epps says. "And none of them — none of them — heard any sirens that morning. Every one of them told us they didn't hear anything, no knocking, no shouting, until the shooting started. They didn't hear anything until the shooting started." Scileppi, who is conducting his own investigation, wouldn't say if he had spoken to neighbors, but did say of the lights and sirens, "What we've found contradicts what they're saying." Epps added, "What I found disturbing is that none of the neighbors would give us their names. These people are terrified of the police, now. Another thing I found strange, they said the police didn't evacuate them until after the shooting."     Radley Balko at the Huffington Post

#2. Why do you wish to continue to spend $50 billion a year to prosecute and cage your fellow citizens for choosing drugs which are not more dangerous than those of which you yourself use and approve of such as alcohol and tobacco?

* State and local governments spent at least another 25 billion dollars.

#3. Do you honestly expect the rest of us to look on passively while you waste another trillion dollars on this garbage policy?

#4. Why are your waging war on your own family, friends and neighbors?

#5. Why are you so complacent with the fact that our once 'free & proud' nation now has the largest percentage of it's citizenry incarcerated than any other on the entire planet? 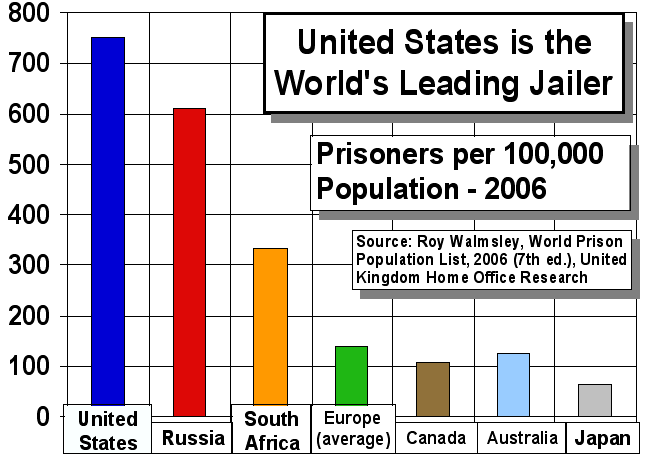 #6. Why are you helping to fuel a budget crisis to the point of closing hospitals, schools and libraries?

#7. Why do you rejoice at wasting precious resources on prohibition related undercover work while rapists and murderers walk free, while additionally, many cases involving murder and rape do not even get taken to trial because law enforcement priorities are subverted by your beloved failed and dangerous policy?

#8. Why are you such a supporter of the 'prison industrial complex' to the extent of endangering our own children?

#9. Will you graciously applaud, when due to your own incipient and authoritarian approach, even your own child is caged and raped?

#10. And will you also applaud when your own child, due to an unnecessary and counter productive felony conviction, can no longer find employment?

Private prisons are publicly traded and their stock value is tied to the number of inmates. Here's what the UK Economist Magazine thinks of the situation: "Never in the civilised world have so many been locked up for so little"

According to Paul Craig Roberts, a former editor of the Wall Street Journal and former assistant secretary to the treasury under Ronald Reagan, "Police in the US now rival criminals, and exceed terrorists as the greatest threat to the American public."

"Narcotics police are an enormous, corrupt international bureaucracy and now fund a coterie of researchers who provide them with ‘scientific support’ fanatics who distort the legitimate research of others. The anti-marijuana campaign is a cancerous tissue of lies, undermining law enforcement, aggravating the drug problem, depriving the sick of needed help, and suckering well-intentioned conservatives and countless frightened parents." – William F. Buckley, Commentary in The National Review, April 29, 1983, p. 495

There is no conflict between liberty and safety. We will have both or neither.
William Ramsey Clark (1927–)