To drive or not to drive, why is it such a tough question?

In debates concerning the use of Marijuana – recreational, spiritual or medicinal – the issue of 'drugged driving' has often been brought to the forefront. So I feel it may be expedient to attempt to cover this rather important topic as comprehensively and concisely as possible.

1. When the combined data of 2002 to 2005 is compared with that of 2006 to 2009, the nation as a whole experienced a statistically significant reduction in the rate of 'past year drugged driving'.  From 4.8 to 4.3 percent. As did seven States: Alaska, California, Florida, Hawaii, Iowa, Michigan, and Pennsylvania. It may be interesting to note, that four of these seven States, Alaska, Hawaii, Michigan and California, have legalized medicinal marijuana. 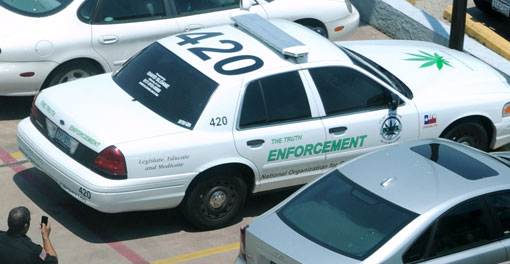 2. California led the US to a nationwide statistically significant reduction in the incidence of 'drugged driving' during a time period when the number of patients claiming the protection of the California Compassionate Use Act and SB-420 increased by a factor of 10.

3. The Journal of Psychoactive Drugs, Hartford Hospital in Connecticut and the University of Iowa Carver College of Medicine document states that MARIJUANA DOES NOT CAUSE DANGEROUS DRIVING.

The often cited statistic that 6-8% of drivers in motor accidents test positive for marijuana is a case-book example of mistaken causality. A positive test merely indicates that the driver has used marijuana sometime in the past 90 days. Since roughly 7% of the population uses marijuana on a monthly basis, the 6-8% statistic, far from proving anything about the effects of marijuana, simply affirms what should be expected.

Here is a graph which indicates the presence of certain amounts of cannabis in your body actually REDUCES accident risk: 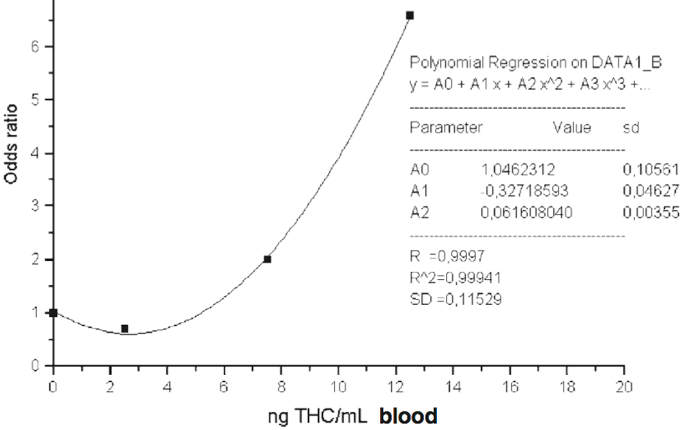 2. Unlike those under the influence of alcohol, marijuana consumers are very aware they are impaired. They consistently and adequately compensate for their perceived impairment by reducing speed and generally being more cautious.

"In conclusion, cannabis impairs driving behavior. However, this impairment is mediated in that subjects under cannabis treatment appear to perceive that they are indeed impaired. Where they can compensate, they do, for example, by not overtaking, by slowing down and by focusing their attention when they know a response will be required. However, such compensation is not possible where events are unexpected or where continuous attention is required. Effects on driving behavior are present up to an hour after smoking, but do not continue for extended periods."

"Thus, not only is it problematic to estimate the percentage of accident involvement's associated with cannabis use alone, there is no evidence that impairment resulting from cannabis use causes accidents. Attempts to alleviate these problems by calculating risk of culpability for an accident (rather than the risk of having an accident) suggest that cannabis may actually reduce responsibility for accidents." More here

Going on the available evidence, how long should a person wait until it's considered safe to drive?

* A comparison meta-analyses of experimental studies on the impairment of driving-relevant skills by alcohol or cannabis suggests that a THC concentration in the serum of 7–10 ng/ml is correlated with an impairment comparable to that caused by a blood alcohol concentration (BAC) of 0.05%. More here

* It takes approximately 2-3 hours for your serum THC concentration to fall below 10ng/ml after smoking cannabis (of different strengths). In other words you’re considered okay to drive after 2-3 hours of using. 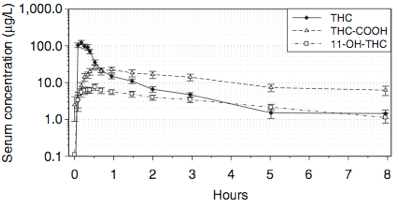 Please bear in mind that THC-COOH is the inactive metabolite.

In November 2010 Drug Czar Gil Kerlikowske  presented this to the press: New Data On The Dangers Of Drugged Driving.

Kerlikowske also forgot to mention the inconvenient fact that U. S. traffic fatalities are at a record low despite drivers traveling farther than they did in 2008. A National Highway Traffic Safety Administration study of traffic injuries and fatalities in 2009 found that 33,808 people were killed in vehicular accidents, which is a decline of 9.7 percent from 2008’s figures. In fact, you’d have to go all the way back to 1950 to find a year with fewer fatalities.

According to the Department of Transport there were only 44.7 million cars on U. S. roads in 1950 with a population of 150 million compared to today’s 255.9 million cars and a population of 310 million. Which translates to the probability of being involved in an auto fatality as being dramatically lower than it was 60 years ago. More here.

Findings from a new study appear to support what most of us already know:

* This very recent study clearly shows a nearly nine percent drop in traffic deaths and a five percent reduction in beer sales in states that have legalized marijuana for medical use.

The researchers collected data from a variety of sources including the National Survey on Drug Use and Health, the Behavioral Risk Factor Surveillance System, and the Fatality Analysis Reporting System. They analyzed traffic fatalities nationwide, including the 13 states that legalized medical marijuana between 1990 and 2009. In those states, they found evidence that alcohol consumption by 20- through 29-year-olds went down, resulting in fewer deaths on the road.  More Here