Life and a box of Cake Mix

Out of the BOX ingredients make a tasty Medical Marijuana treat!

Life is what happens when you are busy making other plans. John Lennon sang something along this line in one of his songs.  My life has had many twists and turns, as I’m sure we all have had plenty of them.  You just got to get on with life.  If something happens, accept it, deal with it, and get on with things.  No need to dwell, nor look back, move forward an move onward!  My grandfather used to teach me to learn something new each and every day, or you are not living right.  I try, some days it is hard to do, some days it’s as easy as cooking with marijuana!

The other day I did something I’ve never really done.  I’ve tasted it before, I’ve seen it done, just never did it myself.  Wanting to make a treat, yet not having the energy to create something new, I scanned the shelves, and BONGO, I got an idea. I recently inherited some frozen and dry goods when a friend who died.  The family was going to throw it away, so I asked for it. 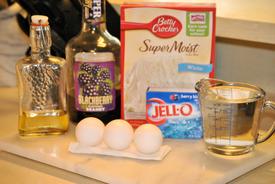 She was a cook/baker, so I got lots of stuff I could use.  Some I never used like a box of cake mix.  Then I noticed a box of Berry Jello, and some marijuana infused Blackberry Brandy from the holidaze that I had left over.

So, I baked a boxed white cake using the recipe on the box except I substituted marijuana salad oil for oil, and stirred a blueberry jello & Blackberry Brandy mixture and did a swirl-twist through the cake mix.  Baked it like the box said to do.  Then I took the left over jello powder and mixed it with 2/3 cup of hot water and 1/3 cup of the marijuana infused blackberry brandy.  When it was done, I poked holes throughout the cake, and poured the mix over top.  Put in ice box until it sets up.

I was pleased with the outcome, and so quick and easy to do on a snowy day the end of May! Yes, I said ‘snowy’… can you believe it!  I’m sharing a picture of the finished cake, but I messed it up trying to get out of pan, so don;t hold it against me!  I ‘Bud’der’d it, but forgot to flour it and once it cooled it didn’t want out of the pan!  Icing would have solved the problem, but since it’s only for my medicine, I left the icing off as there is enough sugar in the cake mix and blackberry brandy. 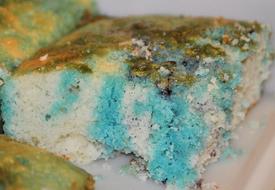 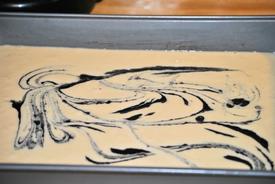 Snowy Daze in May… WTF!! 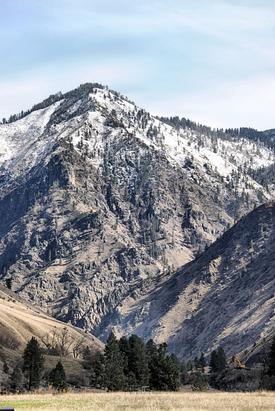 It gave me the energy to do something outdoors, even in the snowy weather!!  The hands and knees were feeling much better, so I put on a raincoat over a hooded sweat shirt, even put on some long sweat pants and took the dogs for a walk, or should I say they took me for a walk, I just followed close behind to keep them both out of trouble.  That cake was something we all needed on a cold and snowy day in May!!

That afternoon a friend who is a Viet Nam Vet, retired musician, rock & roller, drooped in to see “What’s cooking?”  He claims I am HIS doctor now, says I do him better than the VA and all their meds.  Says his wife wants to meet me, because I’m the only one who has gotten him out of bed before noon for 25 some odd years!  She claims he now gets up around 7AM and is working in the yard or with the horses when she gets up.  I’m no doctor, I’m a patient caring for myself, and my friends.  The way it should be!

So, like my grandfather taught me to do, I did something new in the Bitch’n Kitchen using a couple of box’s right off the shelf!  Like I said earlier: ‘some days it’s easy as cooking with marijuana!’

Keep it phat, and don’t forget to medicate, or ‘Bud’der & flour your cake pans!

PS:  My friend also told me those ‘TOAD Bars’ should be illegal they work so well!  I told him they were in 34 states, but not Colorado!  Hee Hee Hee