4/20. Give thanks. In the immortal words of Dave Chappelle as Rick James “It’s a celebration!”

Soil Recipes: The first two are for containers. The third 3rd is for raised beds and the ground.

Plants that will attract this:

1. FOXGLOVE. The flowers attract the predators, but this does not flower until the second year. Probably better to get one from a garden center.

2. MULLEN. This plant attracts the beneficial insects, but also is well known for being a smoking herb. It is actually known to prevent and treat pulmonary problems, as well as useful as a remedy for cough when smoked. It is generally flavorless when smoked, and if smoked with your weed, will almost nullify any coughing from the hit. Excellent for use in a six-footer.

The following plants either help with soil structure, add nutrients to soil, or help repel pests.

ALFALFA: Perennial that roots deeply. Fixes the soil with nitrogen, accumulates iron, magnesium, phosphorous and potassium. Withstands droughts with it’s long taproot and can improve just about any soil! Alfalfa has the ability to break up hard clay soil and can even send its’ roots through rocks! Now that is a tenacious plant! Alfalfa is practically pest and disease free. It needs only natural rainfall to survive.

BEET: Good for adding minerals to the soil. The leaves are composed of 25% magnesium making them a valuable addition to the compost pile if you don’t care to eat them. Companions are lettuce, kohlrabi, onions and brassicas. Garlic improves growth and flavor. They are also beneficial to beans with the exception of runner beans. Runner or pole beans and beets stunt each other’s growth.

BORAGE: One of the best bee and wasp attracting plants. Adds trace minerals to the soil and a good addition the compost pile. The leaves contain vitamin C and are rich in calcium, potassium and mineral salts. Borage may benefit any plant it is growing next to via increasing resistance to pests and disease.

CHRYSANTHEMUMS: C. coccineum kills root nematodes. (the bad ones) It’s flowers along with those of C. cineraruaefolium have been used as botanical pesticides for centuries. (i.e. pyrethrum) White flowering chrysanthemums repel Japanese beetles.

CORIANDER: Repels aphids, spider mites and potato beetle. A tea from this can be used as a spray for spider mites. A partner for anise.

GARLIC: Plant near roses to repel aphids. Accumulates sulfur: a naturally occurring fungicide which will help in the garden with disease prevention. Garlic is systemic in action as it is taken up the plants through their pores and when used as a soil drench is also taken up by the roots. Has value in offending codling moths, Japanese beetles, root maggots, snails, and carrot root fly. Researchers have observed that time-released garlic capsules planted at the bases of fruit trees actually kept deer away! Hey, worth a try! Concentrated garlic sprays have been observed to repel and kill whiteflies, aphids and fungus gnats among others with as little as a 6-8% concentration! It is safe for use on orchids too.

LAVENDER: Repels fleas and moths. Prolific flowering lavender nourishes many nectar feeding and beneficial insects. Lavenders can protect nearby plants from insects such as whitefly, and lavender planted under and near fruit trees can deter codling moth. Use dried sprigs of lavender to repel moths. Start plants in winter from cuttings, setting out in spring.

LEMON BALM: Sprinkle throughout the garden in an herbal powder mixture to deter many bugs. Lemon balm has citronella compounds that make this work: crush and rub the leaves on your skin to keep mosquitoes away! Use to ward off squash bugs!

LOVAGE: Gets very large and can be used for Camo, also known to improve flavor in almost all vegetables and herbs it is planted with.

MARJORAM: As a companion plant it improves the flavor of vegetables and herbs. Sweet marjoram is the most commonly grown type.

MINT: all forms of mint including peppermint, spearmint, catnip, horehound, contain menthol which repels nasty bugs and attracts beneficial ones.

NASTURTIUMS: Plant as a barrier around tomatoes, radishes, cabbage, cucumbers, and under fruit trees. Deters wooly aphids, whiteflies, squash bug, cucumber beetles and other pests of the cucurbit family. Great trap crop for aphids (in particular the black aphids) which it does attract, especially the yellow flowering varieties. Likes poor soil with low moisture and no fertilizer. It has been the practice of some fruit growers that planting nasturtiums every year in the root zone of fruit trees allow the trees to take up the pungent odor of the plants and repel bugs. Studies say it is among the best at attracting predatory insects. It has no taste effect on the fruit. A nice variety to grow is Alaska which has attractive green and white variegated leaves. The leaves, flowers and seeds are all edible and wonderful in salads!

STINGING NETTLES: Good for guerrilla growers trying to prevent their plants being found/stolen. Plant them in a big patch a decent radius around your plot, and they will quickly spread. Anyone who walks more than a foot into the patch will NOT be very happy, and is likely to turn around.

PEAS: Like beans, these drop large amounts of nitrogen into the soil. Great for veg cycle. Highly recommended.

CHILI PEPPERS: These exude chemicals from their roots that prevent root rot and other Fusarium diseases. They are also useful if deer, rabbits or mice often try to feed on your plot, as they are likely to try one of the chili fruits and then not try to feed in that area again.

SOUTHERNWOOD: good camo plant as it gets large quickly and makes a strong lemony smell if brushed that can cover up the smell of your prized plants.

SOYBEANS: Another heavy nitrogen producer. grow it with your plants during veg cycle to throw them some extra organic nitrogen

TARRAGON: Plant throughout the garden, not many pests like this one. Recommended to enhance growth and flavor of vegetables.

YARROW: Yarrow has insect repelling qualities and is an excellent natural fertilizer. A handful of yarrow leaves added to the compost pile really speeds things up. Try it! It also attracts predatory wasps and ladybugs to name just two. It may increase the essential oil content of herbs when planted among them.

The Soil Amendments Plus:

A soil amendment is any material added to a soil to improve its physical properties, such as water retention, permeability, water infiltration, drainage, aeration and structure. The goal is to provide a better environment for roots.
To do its work, an amendment must be thoroughly mixed into the soil. If it is merely buried, its effectiveness is reduced, and it will interfere with water and air movement and root growth.

Amending a soil is not the same thing as mulching, although many mulches also are used as amendments. A mulch is left on the soil surface. Its purpose is to reduce evaporation and runoff, inhibit weed growth, and create an attractive appearance. Mulches also moderate soil temperature, helping to warm soils in the spring and cool them in the summer. Mulches may be incorporated into the soil as amendments after they have decomposed to the point that they no longer serve their purpose.

Perlite: Volcanic glass that has been expanded with heat to make a white pebbles. Many prefer large size perlite because it lasts longer. For containers

Vermiculite: Vermiculite is a naturally occurring mineral composed of shiny flakes, resembling mica. When heated to a high temperature, flakes of vermiculite expand as much as 8-30 times their original size.

Pumice: Pumice is a type of extrusive volcanic rock, produced when lava with a very high content of water and gases (together these are called volatiles) is extruded (or thrown out of) a volcano.

Compost: Plant matter than has decomposed.

A process involving adding oxygen to:
1) Water
2) Compost (in a large ‘tea’ bag)
3) Food source for the biology in the compost

By creating optimal conditions for aerobic microbes, ACT allows you to multiply the biology in the starting compost exponentially. Many plant pathogens are anaerobic and prefer low to no oxygen conditions. By making sure the tea and the compost itself are well oxygenated and highly aerobic, you can potentially eliminate 75 percent of the potential plant-disease-causing bacteria and plant-toxic products.

Directions: Use chlorine-free water, the best local compost you can find, aerate vigorously 18 to 24 hours. Strain. Dilute 1:20 or more. Spray on your plants and water into the soil during low light conditions every two weeks until you see flowers.

Source: What is Compost Tea? By Tim Wilson http://www.microbeorganics.com

“Compost Tea is a water-based environment wherein beneficial microorganisms are extracted from compost or vermicompost (worm compost) and multiplied by the millions and billions. Some form of agitation breaks the microbes free from the compost and they multiply because food, like black strap molasses, fish hydrolysate, kelp meal, humic acid, etc. has been added to the water, which at least one type of microbe digests.

When one or more type of microbe begins to multiply in response to the food, other microbes respond to this growth and begin to consume these initial microbes and multiply in turn and so on and so on. For example the initial microbes are usually bacteria which are food for protozoa so the protozoa multiply in response to the bacteria. The end result is a functional feeding cycle or microbial nutrient cycle. I refer to this as a functional microbial consortia. This tea develops over a period of 12 to 72 hours or more and is then applied to the soil and plants.

In the soil there are a number of organisms which function in basically the same nutrient cycle and zone. Once again, simply stated, there are substances released from the roots of plants which feed bacteria (& archaea).  Again, the bacteria/archaea become prey to the protozoa and the protozoa excrete substances which are available to the roots as nutrients (e.g. nitrogen) thus creating a feeding cycle.

Other compost/soil microorganisms of great importance are fungi. Fungal hyphae, are long branching strands which grow through the soil and serve to; bind soil aggregates together, help retain moisture, store certain nutrients, provide a source of food to certain other microbes, provide pathways for nutrient and moisture delivery, decompose organic material and displace disease causing fungi. 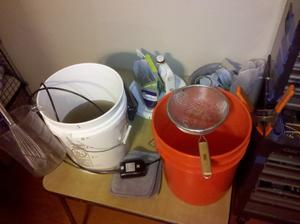 There are also other types of fungi which do not grow (to my knowledge) in compost or Compost Tea which form a direct symbiotic nutrient exchange relationship with roots. This sort of fungi is called mycorrhizal fungi and there are many different species.

The major microorganisms at work in Compost Tea are bacteria, protozoa (flagellates, ciliates and amoebae) and fungal hyphae if present in your compost. It is best to have a wide diversity of each of these microbes present. There are higher order organisms like nematodes found in compost and soil and occasionally these are extracted into Compost Tea but they do not grow nor multiply in the tea. Of course in the soil there are many other contributors to the nutrient cycle, like insects, earthworms and other animals. In its totality this is often referred to as the soil food web.”